(Municipal Stadium has since been renamed Excite Stadium.)
(Click on any image to see a larger version.)

Ever see a gorgeous Jaguar going 25 in the passing lane?  How about a gorgeous house with a view and a huge garden filled with weeds?  A beautiful young man or woman with a huge, terrible tattoo?  That’s how San Jose’s 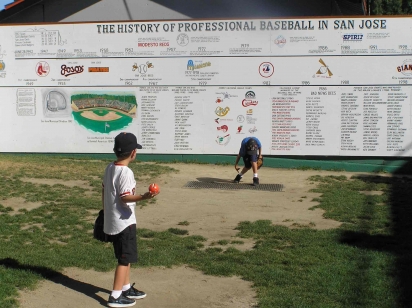 Municipal Stadium made me feel.  Ownership of something beautiful does not mean that the owner knows how to use it.  And the folks who own the Giants, Progress Sports Management (an ironic name if I’ve ever seen one), don’t know how to present their beautiful ballpark to the public.  The loud, ridiculous game I endured in 2006 was one of the biggest disappointments in my years of going to ballparks.

In its physical characteristics and attention to history, Municipal Stadium is right up there with Vancouver and Spokane–which is saying something.  I was very impressed with the loads of California League history, the murals of past greats, and the past standings and stats pasted all over the pavilion.  It was wonderful to soak all of that in.  There’s room to play catch next to the murals, areas for kids to enjoy a pre-game jump-around, a marvelous place to get ribs, and live blues music.  Gigante the mascot is to my satisfaction–I like the name.  The whole place has a positive vibe.  I was looking forward to the baseball.  But the owners of the team 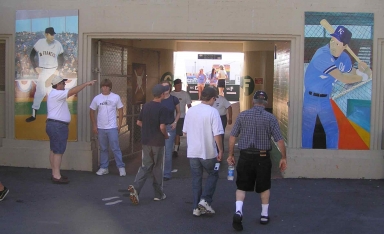 I’m not a straight traditionalist by any stretch of the imagination.  Seriously–particularly at the single-A level, I enjoy some wacky promotions between innings.  But said promotions cannot interfere with the play on the field.  These did.  There really wasn’t any reason to hold a baseball game at all…in San Jose, the baseball game has no value of its own, but only holds value as a sponsorship transference device.

I should have figured that it would be a long night when the person throwing out the first pitch–the local chief of police–arrived via a helicopter that landed on the field.  The helicopter turned out to be the most understated promotion of the night.  (Conveniently, they put live video of the helicopter’s landing on the scoreboard…just in case anyone was unable to find the huge, loud aircraft landing in center field.)  Incredibly, the Giants would make announcements and hold promotions not just

between innings–which I’m okay with–but also between batters and, incredibly, between pitches.

Let us enumerate the worst of their sins:

–I don’t mind the gorgeous scoreboard.  I also don’t mind a promotion marking strikeouts.  But rather than put K’s on the outfield wall, or even keep track of the number of K’s, they simply put a K on the scoreboard, and announced “Another K for Kelly Moore Paints!”  My wife put it well:  rather than a charming, wacky promotion, this was just a dull, corporate promotion.  I want the dull corporate stuff out of my minor league ballpark (and, for that matter, out of my major league ballparks, but that’s a harder battle to face).  There’s no charm, there’s nothing exciting…it’s just a way to make money.  And with Darren Sack’s success pitching the ball, I got so sick of the promotion that I have become an avowed Sherwin Williams man.

–The program cost $7…easily the most expensive program I’ve ever purchased.  It was jam-packed with information about the 2005 San Jose Giants.  In a minor league program, this is terribly unnecessary information.  The lion’s share 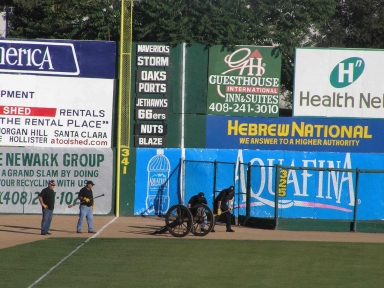 of the 2005 Giants had moved on for 2006…on to Connecticut and double-A ball.  I don’t want to know about them…I want to know about the guys on the field in front of me, and what they’d been up to in Salem-Keizer or Augusta.  Why bother with such a huge, expensive program when a smaller, cheaper one would be more effective?  Again, my business-major wife had the answer:  “More pages means more ads.”  Oh.

–I’m fine with the beer batter.  I am NOT fine with playing music between pitches and after strikes!  When the batter is in the batter’s box, don’t play snippets of “Beer Barrel Polka” with each strike.  The crowd is not stupid.  They know there’s a shot at a beer.  They’ll cheer.  Why insult them with music?  You’re not adding to the excitement.  You’re detracting from the baseball.  Remember that?  Baseball?

–The cannon.  They set it off in pre-game, which is fine, I guess.  But it went off once while the ball was in play:  during a groundout to short.  The player closest to the cannon, left fielder Michael Wagner, damn near jumped out of his stirrup socks.  Two things could have happened:  the cannon could have gone off accidentally, which is terrifying and dangerous, or it could have been intentionally set off during play, which 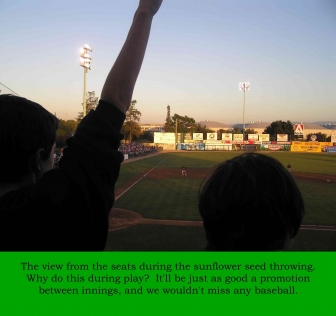 is awful and ridiculous…and, alas, in character for the night.

–Even the fireworks were lame.  Almost never was there more than one firecracker going off at a time.  Stupidly, they showed the fireworks live on the scoreboard.  Why?

The net result of all of this is that the hairs on the back of my neck were standing up.  I don’t know what this evening was about, but it wasn’t about baseball.  And in a ballpark that gets so much right–where baseball is celebrated on nearly every physical surface–I’m upset that the experience isn’t about baseball.  Municipal Stadium, therefore, scores very high in some areas and very low in others.  I hope to return one day when the team is under new management.  In the meantime, if anybody from the Giants is reading this, I implore you:  QUIET DOWN THE PROMOTIONS.  You’ll still get your sellouts, and you’ll be serving your fans in addition to serving your sponsors.

Regional feel: 8.5/10
The pavilion celebrates California baseball, with particular attention to California Leaguers who have gone on to the Hall of Fame.

Charm:  2.5/5
Physically, yes.  But as no advertisement can be charming, neither can the experience of attending a game at Municipal Stadium.

Spectacle: 1.5/5
A couple of good promotions, like one where players tried to bust out the headlights of a car with a baseball, but on the whole, things were ludicrously over-the-top. 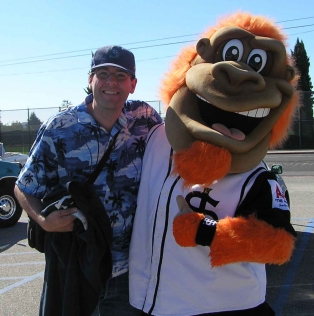 Pavilion area:  5/5
Absolutely gorgeous.  Loads of activity, plenty of art, and a celebration of baseball.

Scoreability:  2/5
Not great here.  It was hard to tell when a new pitcher arrived, and inexcplicably, while the Giants’ lineup was listed in the pavilion, the opponents’ were not.

Fans:  2.5/5
I give San Jose fans credit for the sellout.  I do NOT give them credit for their baseball acumen, however, as it’s clear they’re eating up the garbage that the team is shelling out.

Intangibles:  0/5
A ballgame experience that, in the end, actually upset me.  So much wasted potential here.

The Giants’ Darren Sack is the star, giving up two hits and striking out six in six innings of shutout ball.  Thomas King and Ben Cox finish the four-hitter, giving up only an unearned run in the ninth.