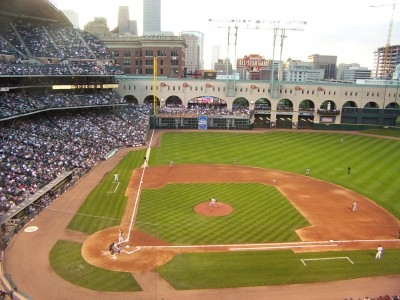 I admit that some of it had to be my political views.  I rarely take my bleeding-heart-liberal-thinkin’, dove-lovin’, Dukakis-votin’ political views into the ballpark.  And maybe I was just politically sensitive because of my experience earlier in the day at the George H.W. Bush Museum in College Station.  But there was something dreadfully awry about the way this ballpark was set up.  It’s especially helpful to compare this ballpark with the excellent Ballpark in Arlington because Minute Maid does wrong all of the things that The Ballpark in Arlington does right.

It goes all the way back from their beginnings striking oil up through modern day.  And, on the day I attended the Bush museum, I couldn’t seem to escape Republicanism in Houston.  I admit that I was sort of hoping to encounter George and Barbara in the flesh on the day that I visited their museum, but alas, it was not to be.  My seats weren’t nearly good enough (I can’t afford to sit with Republicans).  But I don’t at all see the point of heroic pictures of Dick Cheney outside a ballpark.  I’d find a heroic, flag-featuring plaque of Al Gore just as silly.  George H.W. Bush?  At least he was a ballplayer.  But a celebration of Halliburton just because they helped roust up the bucks for the ballpark violates what I see as the sacredness of a shared space.  Ick.

To be sure, I tolerate corporate sponsorship at some level.  Naming rights?  Hate it, but understand it…even for Enron.  Silly advertising, like “This batter digging in is brought to you by Ace Hardware, for all your digging needs?”  Terrible, but I’ll swallow hard.  But both are preferable to this silly self-aggrandizement of a company.  How can they place Cheney in a better piece of real estate–closer to the stadium, easier to find, larger–than past Astros like Joe Morgan, Jose Cruz, and Darryl Kile?  Unacceptable.

Besides, if a noted Republican wanted to, they could always simply buy a brick, as this one did: 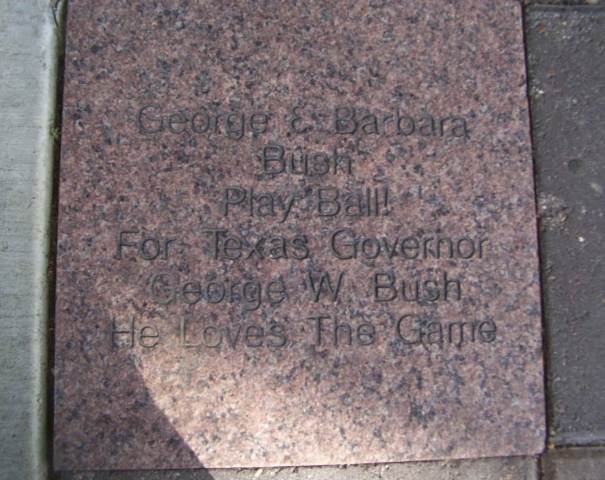 What a sweet little father-to-son gesture!  I agreed with very little that Bush 41 did in office, and less with his son, but still, you get a sense that it’d be fun to hang out with them at the ballpark.  Clinton, too, although he’d more likely ditch you to be with the babes.

I’m still not done with my complaints of the capitalist creep in this place.  Once on the inside, there are not one but two scoreboards (one down the third-base line at field level, the other up high by the right-field foul pole) that actually run the day’s stock ticker.  Come ON!!!  I thought “well, maybe it’s just for the pre-game.”  Nope.  It continued through the game, popping up between every inning.  I can tell you that, on April 15, 2004, Halliburton stock was up 37 cents a share.  I could also tell you the price, both current and settle, for natural gas, crude, unleaded, and heating oil.  Please!  That’s simply not acceptable.  Why not do one quick ticker at some point and have it sponsored by Charles Schwab or something?  Who the hell is going to come to the ballpark to look for stock quotes?  Isn’t a ballpark supposed to be an escape from these sorts of worldly pursuits and concerns?  If you need to check your portfolio while at the ballpark…and check it between every inning!…I urge you to trade in your tickets and use the money you save on professional help.

This issue was only one part of the generally charmless feel of Minute Maid Park.  I understand that Houston’s hot, humid summers necessitate a retractable roof that can completely enclose the stadium.  It’s better than the retractable roofs at Miller Park and Bank One Ballpark because there’s no tall wall beyond the left field stands…but still, a tall enough one to obscure potential views of downtown.  There’s no excitement to the neighborhood as there is in Baltimore or Denver…the ballpark is hemmed in between downtown on one side and freeways on the other, with all the inherent business therein (but given the Halliburton history and stock tickers, that’s probably what they have in mind for a crowd).  The concourses are sterile, with no sense of history–team records are horribly misplaced in a back stairway.  THERE ARE NO CUP HOLDERS IN THE THIRD DECK!!!!

I just kept finding new ways to be annoyed with Minute Maid Park.  Even the bits that were meant to be endearing felt more annoying to me, like the ballpark was trying too hard…sort of like a four-year-old mugging for the camera.  The wacky, jagged outfield walls…the stupid train with oranges on it…all too much, I felt.

There were a few positives:  the Biggio and Bagwell statues turning a double play outside, for instance, and the 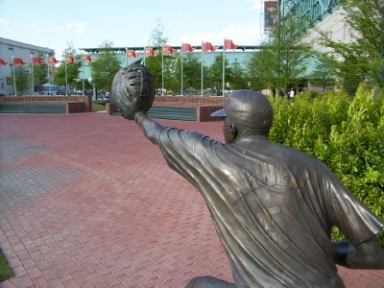 displays of PA announcers’ words for the hearing impaired (I’d never thought of that).  I have to admit, I like the hill in center field, and the flagpole in play there.  It’s sort of like playing in a backyard, only larger and with better players.  There was a lovely scoreboard promotion for a car maintenance company that I wish I’d thought of:  “Brake for a kiss.”  The camera would focus on couples at the ballpark–all ages, races, levels of physical attractiveness–and when couples saw themselves on the screen, they were expected to kiss.  Some kissed sweetly, one woman totally jumped her date, some elderly couples got respectful, sweet applause…it was a nice bonding moment throughout the stadium, I think.  One of the best uses of the Diamondvision I’ve ever seen.  (Given the Republican slant to this ballpark, how long will it be before we see a gay couple in this promotion?  I won’t hold my breath…even in my liberal hometown of Seattle, they’d get too many complaints from the God squad.  Someday, though, I hope…)  Also, I got to spend part of the game talking about my former Louisiana home with David, the gentleman from 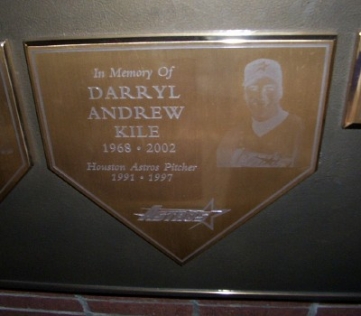 Elton, LA who sat next to me.  I spent 6 innings annoyed with David because he didn’t have a sense of personal space.  He sat with his legs pointed out diagonally from his body, such that his knees were interfering with my personal space.  I tried every socially acceptable method I could think of to move him back to his space…light leaning, fidgeting, etc…but to no avail.  But eventually, I asked him where Elton was (it was displayed on his hat…and maybe that’s a Southern thing…why don’t I see baseball hats with small companies that announce “Redmond, WA” on them?).  Turns out it wasn’t far from the place I taught for a couple of years…and he has relatives who went there.  A nice guy, even though (or perhaps because) he’d had a few beers by the time we talked.  He informed me that Ben Sheets is from Monroe, Louisiana, and had struck his sons out in high school ball a few times.

But on the whole, this ballpark represents all of the negatives of the new proliferation of ballparks and few of the positives.  But at least the Astros are outdoors now.

Ben Sheets pitches magnificently for five innings to pick up the win, only leaving due to an injury.