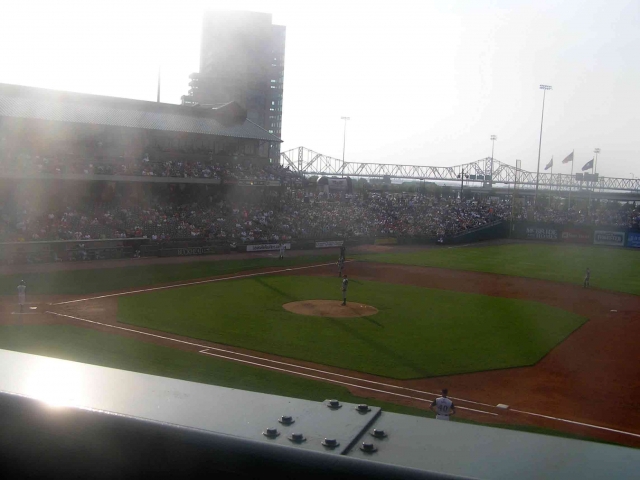 First of all, check out that picture up there.  Seriously.  Do not Windex your screens.  Have you ever seen such a damn hot place?  The heat practically busts through your screen.  Temperatures for this

late-afternoon game–a 5PM start on a Sunday in July–were in triple-digits. Public service announcement: THE THIRD BASE SIDE IS THE SHADY SIDE. SIT THERE.  I was on the first base side, and therefore, my recollections of the place are going to be as hazy as that picture. Everything I remember will be, to say the least, impacted by my broiled brain.

That’s a bit of a shame, I think, because under other circumstances, I probably would have liked Louisville Slugger Field more than I did. The park has a lot going for it. First, and most notably is its location. It’s just off the river and a not too far from downtown, and both are visible from the seating area (although the Ohio is on the other side of a wide road–the bridges are more therefore more visible than the water). It’s a nice ballpark of the new generation, with all the positives (nice location, good amenities, ability to see the game while getting food or desperately-needed water) and negatives (a bit similar to others of its generation, a few too many sponsors and sponsorships, and a damn

carousel…no ballpark in the universe should be permitted to have one).

I give the team credit for a good name for its stadium and team. “Louisville Slugger Field” is a nice means of getting both sponsorship money, local color, and baseball history worked into one name, and “Bats” is a decent play off of that. I seem to recall the team was named “Redbirds” in my youth, but with the Cardinals long gone, it’s totally reasonable to junk that and to have a more locally-appropriate name.

Local color was noticeable throughout the ballpark as well. The “Kentucky Baseball Hall of Fame” is housed on the premises. There are Cooperstown-style plaques for particularly noteworthy Kentuckians (Pee Wee Reese, Rube Waddell, and Jim Bunning were three that stood out

to me). There’s also a lengthy bit of Louisville minor league history, focusing on decade-by-decade rundowns of local teams. I’m always glad to see who’s passed through a particular town on their way to stardom, and what teams happened to come together to see success along the way.  The Bats seem to get the appeal of that.

Louisville itself, which I had no impression of prior to my arrival, impressed me. I got into town at what I thought was three hours before game time to spend a little time at the Muhammad Ali Museum.  Immediately upon my arrival in Louisville from Nashville, I discovered that, even though I had driven more or less directly north, I had gone from Central to Eastern time.  So I didn’t have the time to enjoy the city that I would have liked, and that’s too bad. The Ali Museum looked lovely, but I only arrived about a half hour before closing.  Oh well–worth checking out the Louisville

Slugger factory/museum, right?  Closed for a private party. The main drag of what looked to be old downtown looked like a place to have a good time, but by the time I’d stepped into two closed or closing museums, I was too hot and annoyed to care. But I won’t hold a grudge; Louisville looked like a fine place to go.

Quick guess: who’s the subject of the sculpture outside of Louisville Slugger Field?  Sorry–wrong.  It’s Paul Hornung.  Yeah, I didn’t guess it either.  It was probably the only non-sequitur in a place that otherwise did a fine job of respecting baseball.

I encountered this funny situation in my pregame circumnavigation of the field.  I spotted two kids faced with this very intimidating sign at the bottom of the left-field berm (or, to put it another way, on the spectator side of the left-field wall):

This is, of course, quite a bummer for any kid who’s at the ballpark and wants to play catch. No throwing of any objects?  OK.  So I watched two kids roll a baseball along the cement path by the wall. On the third roll, the ball hit the crack in the cement and bounded upwards, over the fence, and onto the field of play, leaving two perturbed kids with very little idea what to do next. 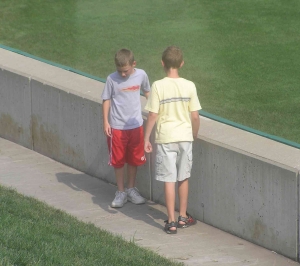 The heat did not prevent the Bats from pulling out all stops to put on a decent show.  For starters, the Indianapolis Colts’ cheerleaders made the drive down I-65 to do some dancing for us all.  Under most circumstances, I would take a look at their skimpy uniforms and think “Gosh, how alluring and pleasant.”  On this occasion, however, I thought: “How practical.” I’d have dressed that way myself if I felt that I could pull it off.  I doubt it, though…I don’t have the chest for it.  Also, the Bats had a wacky pre-game deal where they would send a dog out onto the field with a bucket of baseballs for the umpires.  At first, I felt for the dog and was ready to call the ASPCA on the spot.  But then, later in the game, the dog provided the umpires with cold bottles of water.  That’s very, very kind of the Bats.  And of the dog.  Good dog! 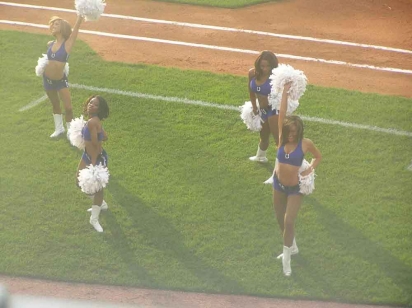 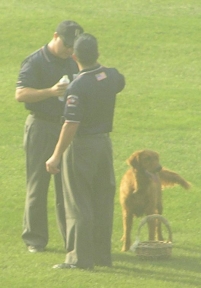 I sat next to some very friendly (and very, very rural) folks for a few innings, and enjoyed talking to the guy.  He’s a Reds fan who takes his kids to one game a year. I just wish the kids had wanted to watch the game: after the hundredth time running in front of me and making me move my feet so he could run by, it got rather old.

So, even though the weather conspired against 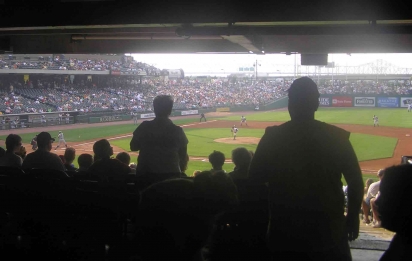 me this time, as it would for subsequent games in Peoria and Pittsburgh, I can see through that and be complimentary towards Louisville Slugger Field.  The best part of the game, I will have to admit, was the part where I was ordering a Sprite and water (not mixed together) and peering at the game over my shoulder. But even beyond that, I was able to sense that this was a nice ballpark with fine fans and a decent atmosphere in a city with a good deal of character.  I’ll be back.  I hope it’s in April or May, when I can likely enjoy it more.

Regional feel: 8/10
Sure, the place is a cookie-cutter, but you can’t argue with that river or that downtown view.

Here’s Buddy Bat getting the snot beat out of him at a kid’s party.  I like both Buddy (maybe a tad commercial?) and the punny name Bats. 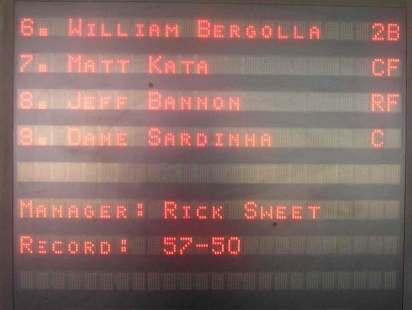 From the Technologically Advanced Does Not Mean Better Department:  The Bats put the lineups on a readerboard in the concourse.  I thought it was a cool thing to do…until I realized there was no way I’d be able to write them all down (the screens weren’t on nearly long enough). This was countered by the nice, updated scoring and such they had on their scoreboard.

Fans:  5/5
The fact that people showed up at all on this miserably-hot day means they earn the maximum score.

Intangibles:  1/5
Sorry, Louisville fans, but the intangibles for me were that I felt like I’d been trapped in a closed tanning bed with hot jelly donut filling poured over my body–for nearly 3 hours.

Josh Phelps’ three-run homer in the ninth puts the game away for the Mud Hens.

Chad Durbin pitches eight innings of three-hit ball to pick up the win.

Chad Bentz (pictured) pitches an inning and a third for the Bats. I notice something about him from my angle…and realize that he does not have a right hand, and has a delivery which includes him slipping a glove onto his pitching hand, much like fellow one-handed pitcher Jim Abbott.  Unfortunately for Bentz, he’s the pitcher who gives up the home run to Phelps.

In 2013, Wil Myers hits a home run for Durham only a few days before he is called up (I assume for good) by Tampa Bay.  But he is overshadowed by the Bats’ Neftali Soto, whose 4th-inning grand slam puts Louisville ahead for good.