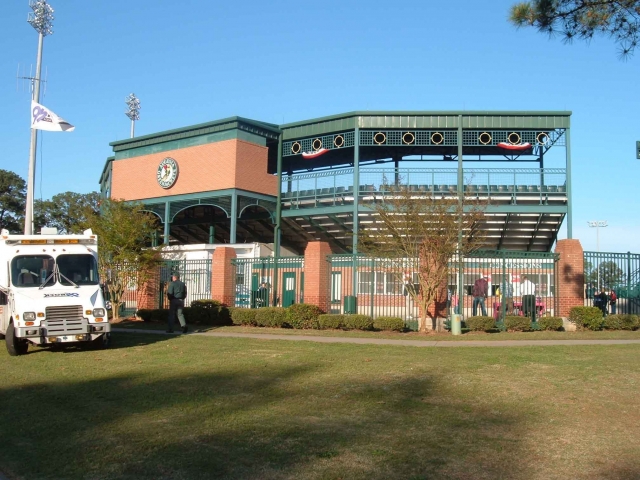 (Lake Olmstead Stadium is no longer used for affiliated baseball as of 2018.)
(Click on any image to see in in a larger size.)

First off, before I get to the ballpark, I must settle a grudge.  This grudge is at least somewhat against orbitz.com and a little more against the Regency Inn Augusta.

the chick-in-too-much-makeup-and-slutty-clothes who was leaning up to the window of a pickup truck in the parking lot.  But I went and gave the guy my $30.  I walked past the weed-ridden pool area, weed-ridden balcony, weed-ridden walls. I checked out the brownish-yellow grout in the bathroom, the chipping-away sink.  I felt yucky.  I headed back out past the half-naked guys on cellphones on the balcony (there might have been six guys staying in the 148-room place) to go to the ballgame.  I noted that the too-much-makeup woman was now seated on the curb.  Waiting.  For something.

Well, I’d had it.  I was nervous from feeling yucky and even a little bit from dreading the possibly unsafe walk back to my room after the game.  So I called Orbitz to tell them I was disappointed that this place (a two-star place, no less…not a one-star!) was a place they had listed.  He called the manager to ask if he’d refund my money.  The manager refused.  The nice guy at Orbitz said he’d look into getting the Regency Inn removed from Orbitz.  But as of this writing, it’s still there.  So, I must say this:

DO NOT STAY AT THE REGENCY INN AUGUSTA.  It is scary and gross.  And while you’re at it, you’d do well to use Expedia or Hotwire or such to book your hotels until Orbitz yanks that rathole from its otherwise-fine website. 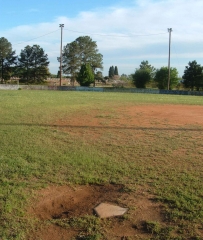 (There!  Now, if two people find this page while looking for a hotel in Augusta, and decide not to stay at the Regency, then the manager’s decision not to refund my money will COST him money!  Email me if you were dissuaded from the Regency by reading this.  You’ll make my day.)

Okay.  I chalked up the $30 as lost to a learning experience, booked a new hotel to reduce my stress level, and headed out to Lake Olmstead Stadium.

The ballpark is attractive on the exterior.  It feels newer than the 10 years old it is…they’re obviously taking care of the ballpark.  It was the home opener that night, so the bunting added a festive touch.  It’s located across the street from the actual Lake Olmstead, a lovely sportsman’s spot for the Augusta area.  I wish the ballpark were a little closer to the lake, but that’s rather nit-picky.  The ballpark is adjacent to a very poorly-maintained baseball field, which detracts a bit from the charm…surely either they or the city could spend a few bucks to get that field up to Little League condition so that kids could play right next to the grown-ups.

Once inside the ballpark, I didn’t notice a lot that showed me I was in Georgia, or even in the South.  Only the climate helped.  Still, the ballpark had some nice 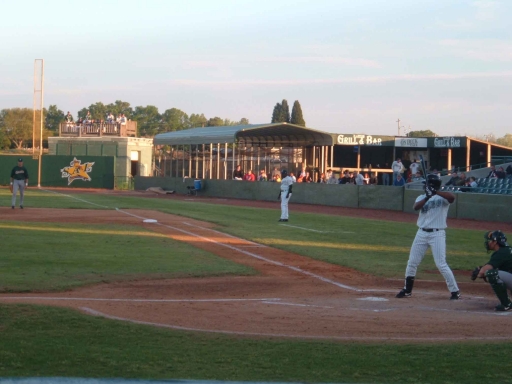 charm about it.  The visitors’ pitchers sit about fifteen feet above the field just to the foul side of the right-field foul pole in sort of a spartan skybox.  No chance of heckling them, sure, but they probably have a nice view, and it’s a nice visual for the rest of us.

The game event itself didn’t do a whole lot for me.  I do believe that the nickname is one of the best in the minors–it marvelously incorporates what Augusta is most famous for into a nice pun with a suitable mascot.  Sting (will Gordon Sumner sue the GreenJackets to get his name back?) is one of only two mascots who has ever actually spoken to me.  You see, when I went to have my picture taken with him, I started up conversation.  I asked him what his name is.  He pointed to his gluteus maximus, where an insect’s stinger would be.  I played along, lightly.  “Your name is Butt?  Rear end?  Tush?  Smells?”  I think the guy probably didn’t like those jokes, because he leaned in to me, and in a basso profundo way deeper than his famous namesake’s high tenor, said:  “Sting.” I told him I didn’t think he was allowed to talk.  He shook his head no, and indicated to me that I should keep hush-hush about it.  Don’t worry, Sting.  I won’t tell anyone.  Except for whoever reads this.

On the whole…pretty good.  A nice ballpark in many ways, but I can’t say it blew me away, mostly due to a lack of local character.  I may go back someday, but I sure as hell won’t stay at the Regency Inn.

Regional feel:  4/10
I didn’t get much beyond the nickname.

Charm: 4/5
Quite nice–brick and iron, well taken care of. 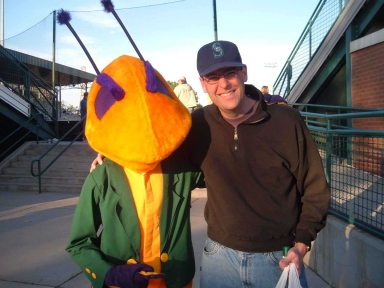 Sting and me, just after Sting spoke.  LOVE the name of the club.

Aesthetics:  3.5/5
Not much in the way of a view, but the park itself was quite lovely.

Intangibles:  3/5
I admit I was in a bad mood due to earlier events, and it was also a lousy game.  But it still hung in there.

After taking the lead on an early Steve Mortimer home run, Savannah fell apart.  Brian Horwitz went 4-for-5 with two doubles.  Simon Klink went 3-for-5 with 3 RBI.  GreenJackets pitchers combined on a 4-hitter.

Sand Gnats manager Randy Knorr was ejected–he thought Marvin Lowrance’s foul ball was actually a home run.  Lowrance reached on an error and eventually scored anyway.  All that yelling and the play didn’t make any difference.  But dude, check out his post-ejection expression!  Combination sulk/pout! 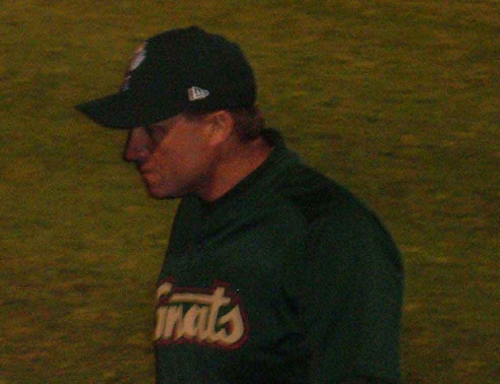