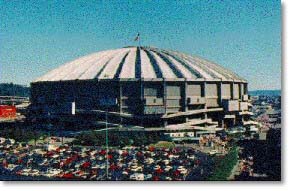 The Kingdome was imploded in March of 2000.

The place was a dump, and in spite of the fact I went to so many games there, and that one might think this might breed some affection, I will never miss it.  The day they blew the damn thing up, I remember they interviewed some guy in his 30s wearing a Seahawks jersey.  He was close to tears, and they asked him for his opinions about the loss of the Kingdome, and he said it just made him sad, thinking of “watching Jim Zorn take snaps there, watching Dave Kreig take snaps there, watching Griffey, Buhner, Randy…”  Wow.  This is a man who did not cry at his own wedding (although I’d lay money that he’s never had and never will have said wedding).  I tend to be a weepy-sensitive-poet sort, and I tend to be an our-place-in-history lover of sports, but I refuse to mix the two.  I mean, every time I went into that place on a gorgeous summer night in the Pacific Northwest, no matter who I was with or how excited I was to see the game, going indoors made me think, just for a split second:  “I’m wasting my life.”  I don’t think that when I enter an outdoor stadium.  Additionally, even as indoor stadiums go, this was disgusting…grey everywhere.  In short, the ballpark itself is not worth another word here.

My first game there remains the only Opening Night I’ve ever attended.  It was two weeks after I’d moved to Seattle.  I had just moved into a scary rooming-house–didn’t yet have any kind of temp work, didn’t yet have a chance to make friends beyond my brother’s friends.  Not the best life situation, but I was still optimistic against all odds, though, which is a perfect state of mind for opening night. It was quite an opener, too:  a sold-out Kingdome the first game after the amazing ’95 playoffs.

A good balance of family and friends were always on hand to go to the Kingdome with me…I went on my own just twice, once to see David Wells get shelled but still win (final score:  16-10…ugh), and once near the end of the Kingdome’s existence, when I sat right behind Griffey in center field, to watch my last game there, where Jose Canseco and just about everybody else homered off of just about every Mariner reliever.  Went with my parents whenever they were in town…Mom’s not a huge fan, but likes “to be with my boys.”  Went with my brother and his friends. Did several games every year with David, an exceedingly kind and bookish actor/director and New Yorker who liked to watch the Yankees (but is not a Yankee fan).  Celebrated my 29th birthday with about a dozen friends watching Griffey hit a game-winning grand-slam so dramatic and perfect that friend Darcy thought it looked suspicious–she thought the whole game might have been rigged.

DeAnn was a terrible blind date I went to a game with…I hated her name (which wasn’t really DeAnn), hated her lack of intelligence, hated her not-so-hot morals, and still went out with her for as long as I could because I was new in town.   Michelle was a major winner who thought it cute when I talked about the infield fly rule.  I’ve heard she got married to the guy she dated right after me.  I’ve also heard she then got very, very sick…I certainly hope that’s not true, and that she’s out there somewhere and doing well.

***October 2004:  I wrote the above, about Michelle, in July of 2001, literally a few days before I got a letter from her reestablishing contact after 4 years apart.  She was not married and not dead. In fact, we resumed contact, became friends, started dating again…and I will marry her in July of 2005.  Yippee!  I am proud to report that she is still a “major winner” and a total babe.

Maria let me take her to a game during her week visiting me in spite of her lack of love of sports.  It still comes up every now and then, and I still explain to her that a love of sports and a love of stories are the same thing.  “I understand that,” she says–skeptically, I think.

A standout Kingdome baseball date was Kerry.  For one thing, Kerry flew all the way from Boston to go to a pair of games with me.  She counted down to her visit in criminally cute emails:  “In only five weeks you’ll be teaching me how to score.”  “Score” puns aside, that ain’t too shabby…what more could a baseball nerd want than to teach a brilliant woman how to mark a scorecard?  At one of our games, Kerry began a fixation on then-rookie Mike Sweeney, simply because she liked the sound of the name “Kerry Sweeney.”  When she pointed her binoculars at his butt, she liked him even more.  So what happens?  Sweeney clearly feels the love, and hits his first major-league home run.  Kerry’s passion for Sweeney has not waned, and in the five years since, under her good karmic graces, he’s become an all-star.  (Mike, if you read this, drop me an email…you clearly owe Kerry at least an autographed baseball.)  We laughed a lot, leaning in, very close to each other, joking quietly, especially at the expense of the stupid children next to us who kept repeating everything I yelled, causing me to shout stupider and stupider things to see exactly what I could get them to say.  These were wonderful dates.  Three years later, I would return the favor of her visit, and she would take me to two games at her home stadium, Fenway Park.

On the whole–some good baseball, a fair share of bad baseball, lots and lots of memories, all good.  I live 10 miles from the Kingdome, and I could feel the earth shake when they blew it up.  Had a lot of fun there.  Glad the place is gone.

Favorite player:  Randy Johnson.  I was a fan since his Montreal days, as I liked the idea of a gangly guy throwing the ball at great velocity and with unpredictable results.  I first got to see him in the opening night game, 1996.  He was long gone when the new rookie Alex Rodriguez, hitting ninth, drove in the winning run in the bottom of the 12th with his only hit in a 1-for-6 night. About a year and a half later, I saw my favorite game of Randy’s, where he gutted out a 5-4 win over Kansas City when he didn’t seem to have his stuff–still, everyone chanted his name, begging Lou Piniella not to take him out.  He struck out 16 that night.

I’ll be talking about seeing Hall-of-Famers like Johnson and Rodriguez  and Ken Griffey Jr. years down the line, I guess, saying I saw them play.  I saw Griffey hit 3 homers and score 5 runs, driving in 6, on a 4-for-4 night against the Yankees.  On the other hand, I twice saw him fail to take a step towards either left or right field on plays where his neighboring outfielder either misjudged a fly or missed making a tough catch against the wall.  Only when the ball hit the carpet did Griffey consider running to back up his teammate.  Inexcusable, just standing there like that. I’ve had people tell me that a major-league outfielder can’t be expected to run to back up every fly ball of the whole year.  My response:  yes he can.

All of these pale in comparison to The Greatest Play In Baseball History, which took place at the Kingdome in my presence on April 8, 1997.  I was way down the left-field line with my partner-in-crime Rob (with whom I have enjoyed 3 games in two stadiums, plus one spring training) when the Mariners’ bullpen was getting shelled again.  This time it was Josias Manzanillo.  Now, Josias was sprinting in from the bullpen full-speed before any of us had ever heard of John Rocker.  So he comes sprinting in and works himself into trouble:  men on second and third, one out. Manny Ramirez is up.  Ramirez absolutely crushes a scary screaming line drive up the middle, 100+ miles an hour right off of Manzanillo.  Manzanillo falls down with the impact, gets up, and throws the ball home to force Jim Thome out at the plate…then goes back down.  Quite an impact…It was only the next day that we learned that Mr. Manzanillo was not wearing a cup.  I don’t want to make light of his injury, which was serious–it ultimately cost him a testicle.  Look it up in Baseball Weekly from early that season:  “Mariner reliever Josias Manzanillo (testicles) is on the DL…”  Still, considering how hard a shot he took, and the fact that he wasn’t wearing a cup, it is indeed amazing that he got up and made the play! But wait, there’s more…once it became clear to the Mariners’ infield that Josias wasn’t mortally wounded (the seriousness of the injury wasn’t known for some time), his teammates started teasing him…”Hey, let’s see you sprint off the field now!”  The best part of the play:  he did.