I sure hope that my in-laws aren’t offended by the score of this ballpark.  I made it down to Salem-Keizer for the last game of the 2004 Northwest League season, on my first visit to Michelle The Fiancee’s parents since Michelle had changed to that title from Michelle The Girlfriend.  They gamely agreed to blitz down to Salem from their home south of Portland to see my final Northwest League stadium.  We hoped it would be a critical game, with Everett needing a win to force a tie 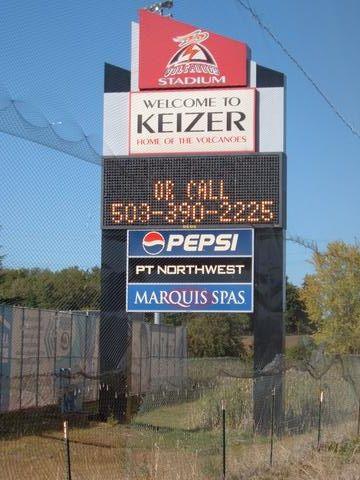 in the Northwest League’s Western Division.  Alas, it didn’t turn out that way–Vancouver clinched the division with a win earlier that day.  Still, this was a good chance to chill with the in-laws-to-be.  While the company was good, the ballpark was charmless and left a lot to be desired.

Location, location, location!  Keizer Stadium ain’t got it.  For starters, Keizer is a small suburb of almost-as-small Salem; it’s about as far north of Salem as you can get and still be connected.  Indeed, it’s far out enough that there’s nothing north of it except cows, at least as far as I can see.  There’s nothing south of it but, you know, boring suburban stuff.  Were it not for Oregon’s mountains in the distance (which were, on this September Sunday at least, almost entirely obscured by smog and haze), I wouldn’t have the remotest clue where in the United States I am while in Keizer Stadium.

This leads me to the main issue I have with Keizer Stadium:  I-5 is only a good cutoff throw from the right-field fence.  This

means that interstate traffic is close enough that I can hear it throughout the game; close enough that I can smell the exhaust.  Just past the interstate is a train track, over which several freight trains traveled during the game.  This could have been enjoyable–to quote Paul Simon, “everybody loves the sound of a train in the distance”–but I couldn’t hear the train over the damn traffic noise. All of this eliminates any hope that Keizer Stadium has for real atmosphere.  It has all the atmosphere of a Denny’s parking lot just off the exit ramp.

I was especially disturbed by the playground down the right field line.  It just doesn’t feel right to have kids playing so close to semis blitzing by on their way to Portland and Seattle.  Maybe

it’s just the teacher’s instinct in me, but there was something freaky–and sort of unfun–about the atmosphere on that playground.

Even with the disadvantage of the location, I don’t feel that the Volcanoes’ people did much to make the best of it.  For starters, lineups weren’t posted anywhere on the concourse.  There were some nice places to walk–I like the picnic tables down the left-field line and the grassy area beyond the left-field fence.  But it’s strange–when I asked the ushers where I could find lineups listed, they looked at me like it was the most bizarre request they’d ever received.  Seems to me that someone would have asked before me.

Keizer Stadium featured one lovely flower arrangement made to look like a baseball.  However, it was put 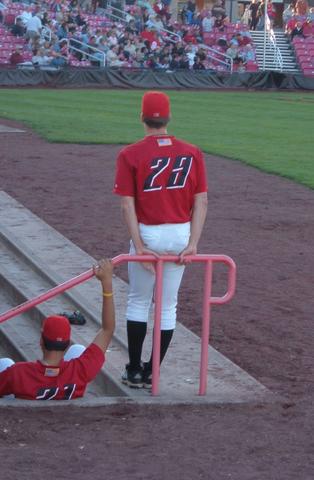 in a place where nobody could really see it except the right fielder..it’s just the other side of the fence from third base.  Those seated down the first-base line wouldn’t have an angle to see that it’s a baseball, and everyone else wouldn’t see it at all.

And while we’re at it, the numbers on the back of the Volcanoes’ jerseys are very nearly unreadable. Does anybody want to hazard a guess as to what this man’s jersey number is? 28, 23, 29?

I did ask Michelle The Fiancee’s Dad what his coming to bat song would be.  He said, not surprisingly, the Marine Corps Hymn.  Not a bad choice.  Mine?  “Superball” by

Aimee Mann, though I’m willing to consider other options.

There was a sweet pre-game ceremony where the Volcanoes players walked out to give a gift to and thank their host families.  It reminded me of senior night for high school sports teams, where players walk out and give their moms and dads bouquets.  It can’t be easy to be on your own in a minor-league town far away from home when you’re 18 or 19 years old. 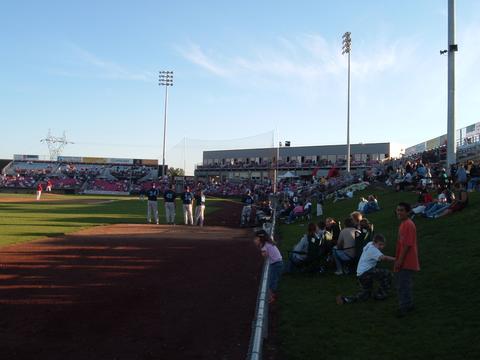 hat came up during the endless game.  As you can probably guess, I never leave games early…and in this game, I was rewarded.  The Volcanoes came roaring back from a 15-4 ninth-inning deficit only to fall short 15-5.  But the fifth run meant a free burger (or something…it was so late at night that we headed home, and I never got it).  To the patient go the rewards.  My bride-to-be and her parents were having a very good time, so I didn’t feel like I was detaining them, but I’d like to announce publicly that I would have left this one early if they’d needed to.

So, in spite of the fact that I didn’t like the ballpark much and don’t plan on returning, a fun time was had just chilling with the fiancee and her parents.  I accomplished what I wanted to–I made it to all 8 Northwest League ballparks.  It had been a fun 2004–13 ballparks in 8 states (14 in 9 if you count the rainout).  Count on at least a couple more of these in 2005.  And in the process, I hope to see a few more scenes like this one, which features the Volcanoes’ John Odom.

Regional feel:  5/10
Very little going for the ballpark here.  There’s a view of Oregon’s mountains beyond right field (mostly obscured by haze), and trains running by past the interstate, but for the most part, this could have been any distant suburb off of any interstate in America.

Charm: 1.5 /5
Very little.  There’s a reason I don’t have a house by the interstate–noise, dirt, and atmosphere–and for the same reasons, I don’t want my ballparks close enough to hear I-5 tractor-trailers.

Spectacle: 3/5
Fine.  Not great for short-season A ball. 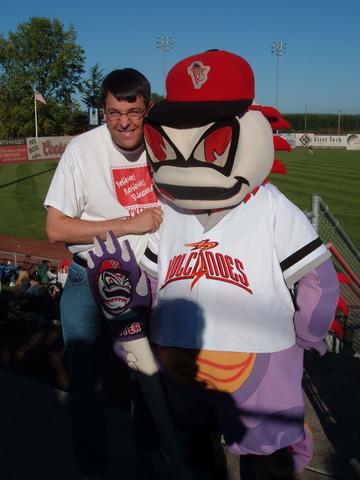 Crater and I squint into the sun…see how his pupils are almost nonexistent?  Yeah, it’s a dinosaur…which has been done (Dinger in Colorado), but I’ll tolerate it for a team called the Volcanoes.  One goofy-looking guy,  Crater is.

Aesthetics:  1/5
Not a pretty place, either on the exterior or interior.

Pavilion area: 2/5
Not much going on…a little playground in the shadow of the interstate, a lot of cement with nothing too fun going on, and most importantly, no lineups. That’s inexcusable.

Scoreability:  2.5/5
Although there were no lineups available, the Salem-Keizer folk did a decent job staying updated on the scoreboard, although they did misspell Brian Schweiger’s name (“Scheiger”).

Intangibles: 1/5
It might have been the suburban location, the damn interstate, or a terrible game, but this place did absolutely nothing for me.

A bloody-awful game, featuring 29 hits and 20 runs.  Everett’s attack featured round-trippers by Oswaldo Navarro (to lead off the game), Mike Wilson, Brandon Green, and Elvis Cruz.  After the latter’s homer, Salem-Keizer’s PA announcer announced “Elvis has left the building.”  I bet Cruz has NEVER heard that one before…although I confess I said it before the PA guy did.

Simon Klink homered for the Volcanoes.

Patrick Rose homers for Tri-City in 2008.

Craig Westcott pitches seven scoreless innings to lead Salem-Keizer to a 7-0 win over Tri-City in Game 3 of the 2009 Northwest League Championship Series.  Evan Crawford goes 3-for-3 with two doubles for the Volcanoes, who wind up finishing off the best-of-5 series the next night.