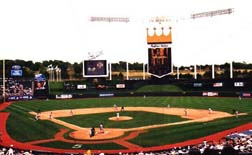 Image from www.baseballparks.com, all rights reserved. Used by permission.

I seldom hear Kauffman Stadium listed as one of the best or classic stadiums, and I don’t know why.  I think it’s a matter of age:  it’s a tweener.  Since it was built in the early 1970s, it’s not old enough to be old, and not new enough to be new.  I also think that the original decision to use Astroturf may have negatively impacted people’s perception on Kauffman as a “classic.”  Its location away from the coasts also doesn’t help matters.  But in my view Kauffman is one of the best ballparks out there.

Let’s start with the name.  Originally “Royals Stadium,” its name was changed to honor a dying owner of the team.  That’s much nicer than the corporate naming that has since become commonplace.  Funny how naming a place after a multimillionaire owner has actually become quaint.  Then come the views.  Just beyond the outfield walls, you’ve got grassy areas all around–not just as a hitters’ backdrop, but nearly from foul pole to foul pole.  That’s nice to see.  Beyond the park, you’ve got a fairly good look at some brown Midwestern prairies and trees.  One of my main stipulations differentiating between a good ballpark and a great one is that, when sitting in the ballpark, there should be no question about what part of the country you’re in.  Those prairies mark the place as Kansas City and the Midwest.  I admit I have a soft spot in my heart for the Midwest, and those prairies certainly are a bonus in my book.  I hope suburban sprawl doesn’t ruin that view, but I imagine it’s inevitable if the Kansas City area grows much more.

My Mariners were in Kansas City while I was visiting family in Missouri.  That provided a great excuse to do a little father/son ballpark bonding.  By the way–those of you who are out there trying to make it to all the stadiums, as I am–how many stadiums have you been to with your fathers or with your sons?  Dad and I have been to 8 different major league ballparks in 6 cities (plus a rainout at Camden Yards)  That’s a lot of coast-to-coast father/son bonding over my lifetime, and that certainly beats the hell out of a lot of other father/son combinations…especially considering we’ve not been trying to build up to a high number.  We’ve just lived in enough different places and traveled enough together to be in ballparks from Baltimore to Seattle, Detroit to Arlington.  At times like the time I was going through when I paid this visit to Missouri, when my days were cursed with stupid temp work, when I was going from feeling unjustly unappreciated to feeling justly unappreciated, when I was suffering from a general feeling that life was falling into an endless period of transition, it’s nice to know that I’ve got family that will take me in and take care of me, including a Dad who will drive two hours to pick me up at the airport and take me to a ballgame. Yeah, that’s Field of Dreams-level saccharine.  But it’s true, so deal.  Besides, you’re just jealous that you haven’t been to so many ballparks with your Dad.

This is the only baseball game I’ve ever been to where I’ve openly rooted for the visiting team.  Now I wouldn’t be stupid enough to wear Mariner gear to, say, Yankee Stadium, and I chose to remain silent even during the M’s playoff games I watched at Jacobs Field, but I figured that I’d be safe wearing an M’s cap to Kauffman for a weeknight game in May, and possibly even doing some limited vocal rooting.  Dad and I parked ourselves about 25 rows behind home plate and watched Jamie Moyer gamely fight for several innings before the terrible M’s bullpen blew it.  Yes, I rooted for the Mariners throughout a game that was close and exciting until the bullpen got involved.  But in spite of my enemy status, I was surrounded by some of the nicest people out there.  The guy next to me identified the Royals’ retired #10 that stumped me (Dick Howser).  He asked me some questions about living in Seattle and seemed genuinely interested in my answers.  He asked me questions about Mariner players (i.e. “Does that guy have any speed?”) and reciprocated by answering my questions about Royal players.  It wasn’t like we were engaged in constant conversation, but it’s nice to be in the Midwest where people are kind to you and assume that you will be kind to them in return.

There is a backlash to this kindness, of course…the fans aren’t nearly rowdy enough.  A good portion of the time is spent sitting very quietly, waiting to be impressed so they can clap politely.  It’s a good bet that this was the quietest major league ballpark I’ve ever been in, at least on a per-fan basis.  Only the pivotal grand slam got them shouting at any level of excitement–nothing in the close first 6 innings got them making any noise in joy or in anger.  You’re really nice people, Kansas City–but you can be both nice and raucous.

After the M’s bullpen let me down, after three hours of talking baseball and whatever else popped up with Dad, I drove him home, and, for the first time in my life, felt responsible for him.  He fell asleep in the passenger seat, and I had two hours of Interstate 70 to negotiate on the trip home–which would take us well past midnight.  For some reason, I felt like he looked older and more helpless than I’d ever seen.  Maybe it was just that he was asleep and I had to take care of him.  I turned up the stereo just a tiny bit, popped in a tape I liked, and quietly, intently sang every word to every song, making sure to stay awake, focusing every part of me on getting my sleeping Dad back home safely to Mom.

Craig Paquette hits two home runs, including a grand slam that gives the Royals the lead for good, 5-3, in the 6th inning.  Jamie Moyer pitched well until then–he was tired. Chili Davis was lucky to draw a walk on him before Paquette came to the plate, but nobody worth a dime was in that awful Mariner bullpen to replace him to face Paquette.  I nominate the 1997 Mariners as the worst pitching staff ever to win a division.  This in spite of some solid starters–Johnson, Moyer, Fassero.  The bullpen was absolutely cringe-worthy, and I have this game’s scoresheet to prove it.