After the horrendously loud and promotion-saturated experience at San Jose’s Municipal Stadium the night before, I welcomed this retreat into a quieter ballpark in a smaller city.  While John Thurman Field wasn’t exactly perfect, it was good for a number of reasons.

The ballpark itself is in a bit of a non-descript area, between a golf course and a somewhat-seedy residential area.  Before the game, it’s possible to enjoy some California Almonds while reclining under an umbrella and

watching people tee off.  It’s also possible to walk right up to Modesto players as they make their way from the clubhouse to the dugout.  On the day we visited, anyone who wanted to could play catch in the outfield was welcome to head out there and do so.  Of course, this late afternoon and many others in Modesto were insufferably hot, so where I normally would have been disappointed to have forgotten our gloves, on this particular day I was fine not to be out there running around.

The concourse is also nondescript–a few concessionaires tucked back by the golf courses.  The promotions were reasonable–there could have been one or two more at the single-A level, but for the most part, they were fine.  Sure, the hot-dog eating contest that followed the game was disgusting, but it didn’t interfere with the game, so I can sit back and enjoy the disgusting

By the way, if you’re thinking of going to the ballpark, believe me, you want to sit on the first-base side in the shade, and not on the third-base side in the sun.  But you will have to get up if you want food. At the start of the game, I experienced one of my favorite ballpark perks:  an usher who offered to get me food while I stayed in my seat watching the game.  Too bad I never saw her again.

Among John Thurman Field’s biggest problems are a horrible PA system:  it’s actually easier to hear the PA in the pavilion than it is to hear it in the seats.  Not that there was much to hear:  the PA guy actually took the time to wish his wife a happy second anniversary.  I don’t like that stuff when it comes from the crowd; why would I like it from the staff?

Additionally, I was a better scorekeeper and scoreboard

operator than Modesto had.  There was a tough scoring call–fielder’s choice where everybody reaches, or error?–in the sixth inning.  As I waited to figure out what the scorer would decide, an affable usher saw me scoring (I didn’t notice anyone else scoring the game here, continuing the trend of nobody scoring games in California…is it banned by the state Constitution?).  He jokingly said:  “Just give Modesto a double.”  I laughed, but pointed out that there was a fairly large error on the scoreboard:  San Jose had two hits, but the scoreboard only had one up there.  It’s not like one of them was tough to miss…both were doubles down the line, one in the second inning and one in the sixth.  The usher immediately walkie-talkied the booth and pointed out the error. 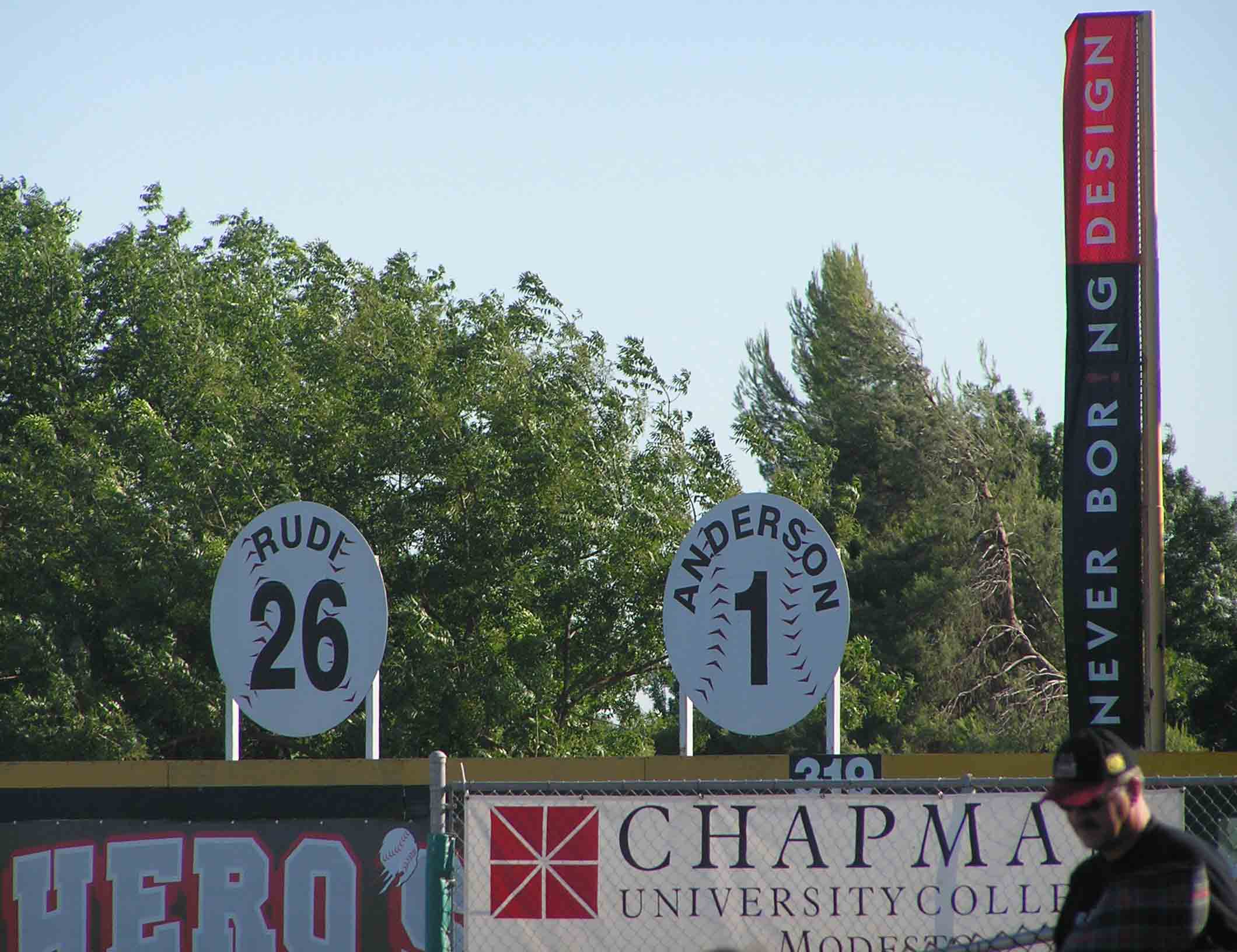 He received an angry, harried response, something along the lines of “I have 5 people at once talking to me!  Stop bugging me!”  Nothing happened for another inning, when the usher called back a second time.  I actually managed to change the scoreboard!  I’m totally confident it never would have been fixed were it not for me.

I got to see a pitcher, Ching-Lung Lo, give a great performance for the second year in a row.  Lo had pitched a gem and lost when I visited Asheville in 2005.  His promotion to Modesto was not off to a great start, but he sure had a great game when I arrived for this visit:  3 hits in 7 innings–2 runs, one unearned.  Mr. Lo, I’m happy to watch you at the AAA level in Colorado Springs in a year or two.  (But, if it’s all the same to you, I’d rather not

return to Drillers Stadium in Tulsa, so get through AA as quickly as you can.)

My wife and I met a nice woman–a mother of two from Southern California who was conned  by her 11-year-old son into stopping in Modesto on the way home from a holiday weekend in the mountains.  She could not believe that my wife and I were in Modesto only to see a baseball game, even though her husband does similar tours of ballparks.  My main concern for her was that she was turning around to talk to us.  Since we were in the second row behind a dugout, I had images of her or her daughter getting their heads exploded by a foul ball.  Hadn’t she read the sign which stated that that could happen?  When I offered to have her join us in the third row so that she could see any threatening line drives heading her way, her response was “No, I’m fine.”  Thank goodness she was right.

All in all, a fine, quiet evening in an ordinary–blessedly ordinary–ballpark.

Regional feel:  6.5/10
Tough to score this since I have no real image of what Modesto’s region should feel like.  They do well with all the nuts they sell in concessions and in the team name, but they fall short in the view from the seating bowl.  Also, the neighborhood and golf course could be anywhere in the USA.

Spectacle: 4/5
Could be one or two more at the single-A level, but not too shabby.  I liked the multiple mascots getting around–and that they didn’t interfere with baseball.

Wally the Walnut is on the left, Peanut the Elephant (I believe a leftover from the old Modesto A’s) is on the right.  Not pictured:  Al the Almond.  Modesto Nuts is an ideal name, and the multiple mascots are quite nice.

Aesthetics:  2.5/5
Nothing too special here.

Scoreability:  1/5
If I have to tell your scorekeeper and scoreboard operator that there’s been a double down the line, well, that’s a serious problem.  (But thanks to the usher for fixing it.)

Fans:  2.5/5
I sat with a nice woman and her daughter, but other than that, the game was sparsely attended and what fans there were stayed very quiet.

Intangibles:  4/5
On the whole, I liked it here, mostly because it was so cozy and calm.

Ching-Lung Lo pitches 7 innings of 3-hit ball to pick up the win, striking out 10 and walking none.  Here he is signing an autograph for a fan in the dugout before the game:

Chris Frey has a pair of RBI.