Jacobs Field changed its name to Progressive Field for the 2008 season.

First, the stadium.  Just gorgeous! Right up there at the very top of the list with Camden Yards and Coors Field.  I love the way that the outer concourses look out at the city.  This isn’t true in Baltimore or Colorado or even San Francisco, and only true part of the way around the stadium in Seattle.  I love the big scoreboard (and the fact that it says “Indians” on it instead of showing the awful visage of Chief Wahoo).  I love the sense of tradition the team has (even if it’s mostly a tradition of bad baseball).  On its own, Jacobs Field is worth a trip to Cleveland.  In fact, Jacobs Field and baseball are the only reasons I went to Cleveland in October 2001.

I had only been dating Sarah for about two months.  Sarah remains the only woman I have ever dated whose passion for baseball exceeds mine, and that’s a bit scary.  We were an item during the amazing 2001 Seattle Mariners season, and had worked our way up to our trip to Safeco Field by first seeing a single-A game and then a triple-A game.  Clearly, we had earned a trip to the playoffs.  When we struck out on Safeco Field tickets and found them too expensive on Ebay, we took 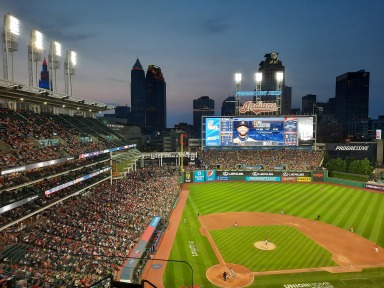 what I thought would be a whimsical, one-in-a-million look at how expensive they would be in Cleveland.  They were surprisingly reasonable.  The next thing I know, we were cashing in some frequent flyer miles, getting great (post-September 11) deals on hotels, and heading out to see two playoff games.

See that score for the first game?  Can you imagine taking a day off and flying 2,500 miles to see that?  It was astonishing.  My college buddies Alison (a lifelong Tribe fan) and Joe drove up to see it with us and to show us a good time in the Land of Cleve.  Two images I won’t soon forget from that first game:

–A problem with standing ovations.  We spent more or less the entire game standing up to see over cheering Tribe fans, then sitting down to put entries in our scorebook while everyone else stayed standing and cheering.  I hope people didn’t feel that I was participating in the standing O–I just needed to see.

–A wild, wild walk back to the hotel.  After the 17-2 Tribe win, I found myself a part of the only massive sports celebration I’ve ever experienced.  People were honking their horns, screaming, and dancing for the entire eight blocks back to the hotel.  It was bizarre.  One driver was angry because so many pedestrians were walking in front of him, and he couldn’t get into the intersection to get home.  So he honked his horn repeatedly, but passing fans thought he was just celebrating like everyone else.  This made for a funny scene:  an angry driver gesticulating at pedestrians who would turn to him and respond with a joyous dance.  I called friends and family from the celebration.  It is a very, very strange sensation being the only person with nothing to celebrate in the midst of passionate partying.  I suppose this is what it feels like to be a Chinese person or a devout orthodox Jew on New Year’s Eve.

The Tribe fans’ celebration was premature, of course…the Mariners won games 4 and 5 to take the series. Game 4 was obviously quite a different experience from Game 3.  We actually sat next to a Mariners fan from Buffalo (how the heck does that happen?).  And we got to enjoy the Terrace Club.  We got to the ballpark over two hours early to get a table and partake of the very nice food at the Terrace Club before the game.  We got a table.  It turned out to be a fantastic idea on our part, as about a half hour after we arrived, it started to rain.  I mean, really rain.  The flag was both sopping wet and straight-out stiff.  A boy near me got scared enough to call his mom and ask if there was a tornado warning.  Everybody in the stadium with a Terrace Club Pass decided to head into the club to seek refuge from the storm.  It was to the point where people were sitting on the floor everywhere with their froofy dinners and their linen napkins.  And Sarah and I had a table!  We kept it.  We ordered our perfect sandwiches.  We had dessert.  We had more drinks.  We had appetizers.  We had even more drinks.  We watched football.  We stayed dry!  We looked down with pity on the Clevelanders huddling in their ponchos, staving off pneumonia, while we debated the merits of the key lime pie or the five-layer chocolate cake, pita chips and warm spinach-and-artichoke dip.  It’s not that I felt I was better than the folks down there…I just pitied them.

And speaking of pity, I’m developing a theory that Clevelanders want it.  Now, don’t get me wrong.  I like Cleveland.  I have a lot of good memories of Cleveland during my college days.  The people of Cleveland were absolutely wonderful to Sarah and I during our trip.  I was expecting some hostility, but got none (perhaps in part because I was with Alison).  But after Game 4, Sarah and I walked past a remote broadcast from a local sports-talk guy.  He was saying that the series wasn’t over, and that the Tribe could still win Game 5 back in Seattle.  He said something like:  “Did you expect this to be easy?  What city do you live in?  Is it ever easy for us?”  The self-pity felt strange to me, maybe because I’m from the pull-yourself-up-by-the-bootstraps West.  Clevelanders, help me out with this theory.  Am I accurate?  Is there self-pity and self-loathing associated with living in what seems to be a fine city?  You’re good people with a great stadium.  Is this about 25-years-obsolete river-on-fire jokes?  Is it about John Elway or Jose Mesa?  What’s the deal?

Again–awesome playoff games at a fantastic ballpark.  I can’t help but think of Municipal Stadium and what a big step forward this is.

UPDATE AUGUST 2021: It took 20 years, but I made it back to Cleveland before the Mariners made it back to the playoffs. The 12-year-old trip for my elder took me there. He wanted to spend a good long time in Cleveland (Rock and Roll Hall of Fame, Classic Park, and here), and so we did. And I found this ballpark to still be one I liked quite a bit. I did look around and remember that playoff trip with the old girlfriend, but the guy who took that trip and wrote those words above feels like as long gone as those two decades would indicate. 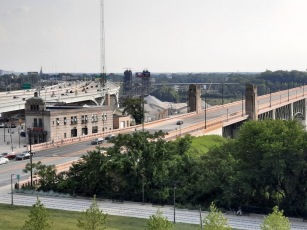 First off–no more Chief Wahoo, thank God; and at this point, I was seeing some of the last games the Cleveland Indians would play before they became the Guardians. I did cross the bridge under the watchful eye of the Guardians of Transportation earlier that day, and found it made me like the game even more. We settled into the game under a gorgeous dusk and watched the Indians pretty much pound the Detroit Tigers. I was a little edgy: the stadium was a little more crowded than I was comfortable with given the rising Delta variant of COVID. But we managed.

Steven reports three things. One (and to my most impressed parental self), Steven declined to order the hot dog with bacon, pimento mac and cheese, and Froot Loops. Maturity–the kid is becoming a man! Second, the Indians mascot refused to high-five Steven because Steven was wearing an Ichiro jersey. Perhaps the remembers the playoff series loss Ichiro put on him at the time of my first visit. Finally, we invented a really spectacular game. When any player is announced (comes to bat, in from the bullpen…), guess the players full name (including middle name) and hometown. He absolutely CRUSHED it by guessing that the Tigers’ Derek Hill was born in Des Moines.

Games 3 and 4 of the 2001 ALDS (which the Mariners won in game 5 back in Seattle).  The first game’s offensive explosion (and to this Mariner fan, it most certainly was offensive) by the Indians surely merited several spots in the playoff record book.  Second game:  one of my favorite ballplayers of all time, Edgar Martinez, hits the longest homer of his career:  458 feet off the walkway above the home run porch in left field.

Cal Quantrill controls the game for 7 innings in 2021, striking out 10. Myles Straw has three hits, driving in two.