I’m not positive about this, since I haven’t looked up the populations of all 220 minor-league cities, but I’m fairly sure that Princeton, West Virginia is the smallest town with an affiliated minor league baseball team.  My American

Map atlas lists its population as only 6,000.  I’m impressed that it supports a minor league club.

I didn’t get much of a feel for the town, but it was obvious that it was small enough that the Devil Rays are HUGE there.  The town’s newspaper, the Princeton Times, is only a weekly, and in the copy I bought, Devil Rays news covered most of the 20-ish pages.  The front-page photo, above the fold, celebrated the Devil Rays’ victory of the Mercer Cup, a trophy which goes to the winner of the season series between the P-Rays and the Bluefield Orioles just down the road.  (It’s worth noting that the Orioles, while they represent Bluefield, West Virginia, play just 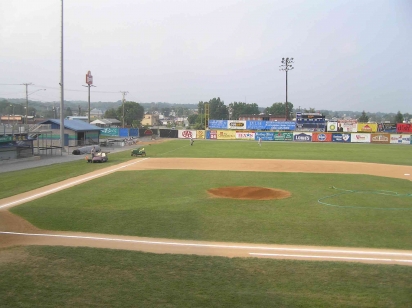 across the border in Virginia, in what might be the ballpark closest to a state border).

The ballpark itself isn’t in any kind of unique location, and does very little to let me know where I am.  The view outside of the ballpark includes a Wendy’s and a McDonald’s.  There aren’t any mountains or other landmarks that let me know I’m in West Virginia or Appalachia.  So I was prepared to give it a low “is there any question where you are” score, which would have doomed the ballpark to a poor score.  However, the workers for the Devil Rays gave me a whole lot of small-town hospitality, and since I was in the smallest town in the minor leagues, they get a lot of credit for that.

It all started with my Everett AquaSox cap.  There is nothing in common between the AquaSox and the D-Rays save a love of colors in the bluish-green family. 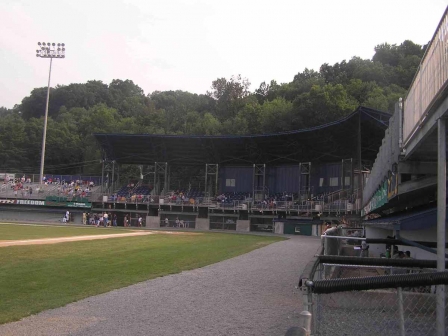 They do not share geography, a league, an affiliation, or much else.  But the guy who offered me a 50-50 raffle ticket looked at my hat and said “Everett AquaSox?”  Nice!  I love minor league workers who are knowledgeable about the minor leagues…it makes the whole experience into a celebration of minor league ball.

Later that night, I headed out to meet Rob and Yolonda in the large-but-nondescript pavilion area (Rob was late to the game due to a horrendous cut-lip-on-broken-beer-bottle mishap in the pregame).  While out there, I saw the man I took to be one of the higher-ups at the ballpark.  I was right–it was the general manager, Jim Holland.  “Everett AquaSox!” he said to me.  I said I was impressed, and that they were my home team.  A conversation ensued where I told him we were trying 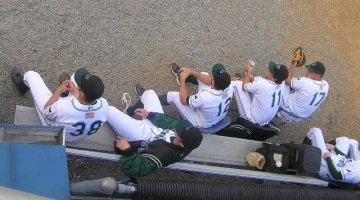 to make it out to a lot of minor league parks.  His response:  “You look like one of those people.”  Indeed, if “those people” are ballpark travelers, I am one.  I just wasn’t aware there was a look about us.  (My guess is “dorky-looking.”)  In exchange for my troubles, he offered me a free shot with the sledge-hammer at the “Hit a Car, Not a Pet” junker car.  I took a swing, and he offered me several more.  I’m basically a non-violent man, but it was nice to get any potential axe-murdering instincts I might have out of my system.  They gave Rob some free shots too.  Here’s one of them:

The fans were quite sweet.  There were loads of middle-aged ladies waving handbells around.  Jim told me they were called the “Rah-Rah Sisterhood.”  I got the sense that a good number of them 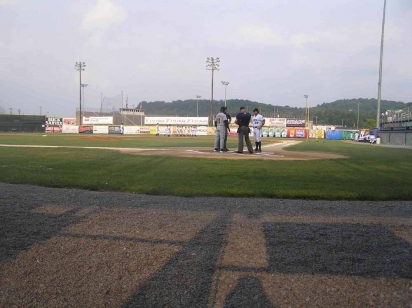 were host families or friends of the D-Rays players, and in a town of 6,000, it wouldn’t surprise me in the least if players regularly encountered a healthy fraction of townspeople.  I could feel that.

And where else other than a town whose only bookstores are Christian bookstores would the primary mascot be Roscoe the Drug-Free Rooster?  Roscoe wandered around giving hugs to just about everyone in attendance.  He headed up in my direction and hugged me.  I talked to him, saying “How are you?”  Much to my surprise, Roscoe talked back to me.  “I’m fine, how are you doing?”  His accent was slow and 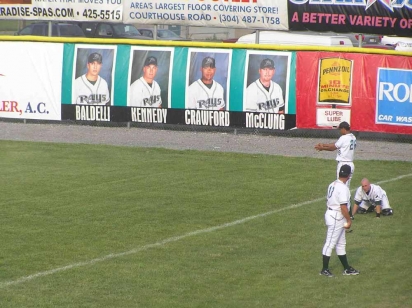 sweet.  I don’t know why, but that made me feel especially good on this night.

The ballpark itself had some interesting quirks.  A walk behind the stands reveals two nice places to stand.  First, down the third base line, a spectator can walk to a vantage point where he/she can peer backwards into the visitors’ dugout (not unlike Battle Creek’s C.O. Brown Stadium) or right at the bullpen.  Underneath the home plate stands there is a wonderful little vista featuring a bench that, as best as I could figure, anybody could occupy–although it appeared spoken for by a couple of regulars.  They honor past P-Rays who have moved on to the big club with pictures on the outfield wall.  And I recommend the fried bologna sandwich, although don’t get caught making the same assumption I did.  I thought

the adjective “fried” applied to the whole sandwich…that they were taking the entire sandwich and dipping in the deep fryer beside the french fries, kind of like Elvis with his peanut butter and banana sandwiches.  That didn’t turn out to be the case. Instead, they had just fried the bologna.  Pretty good stuff…tasted like ring baloney.

By the end of the night, I really had a positive feeling about the ballpark.  I came close to winning a hundred bucks by throwing a tennis ball into a hula hoop (a fairly tough task…the stands are very, very high above the field, and the hula hoop was well out onto the field…but I just came up a few inches short, way closer than anyone else).  Jim, on the field, let us go by saying “We love you!” The cool thing is, after a great night of baseball, I felt like he meant it.  And when we passed him by on the way out and he wished us safe travels…yes, he remembered us…well, I guess it was confirmed.

So, on the whole, the ballpark has just enough charm, quirkiness, and sweetness to win me over in spite of its drawbacks.  If I make it back there, probably to visit Bluefield, I wouldn’t mind seeing Hunnicutt Field again.

Regional feel:  6/10
The view from the seating bowl is dull, and could be from any of the 50 states.  But the fried bologna sandwich and small-town hospitality bump up the score a bit.

Spectacle:  4/5
Pretty good.  While we missed the “everybody gets in free” promotion by 24 hours, and while the “Christian Baseball Night” may be strange to me were I of another faith, there was plenty going on–a moving mascot, a sledge hammered car, food–that was appropriate for low-level ball, but never got in the way of the game.  And I came close to winning a hundred bucks.

Roscoe the Drug-Free Rooster is a bit of a non-sequitur for a marine-based team, but he was a nice guy.  The name “Devil Rays” was appropriate for Appalachian League naming conventions.

Aesthetics:  1.5/5
The one way this park was lacking.  Quirky, but not exactly attractive–and the view is not at all good.

Pavilion area:  3/5
Not terribly picturesque, but I like the sledge-hammer and car. 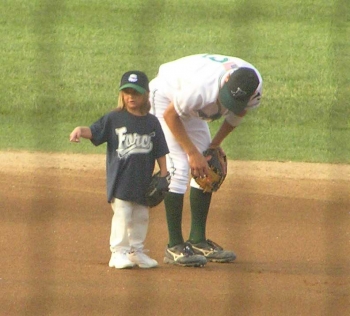 Intangibles:  5/5
On the whole, an excellent night.  Any game that ends with the GM saying “We love you!” and my not being creeped out by it is a good night.

Andrew Lopez hits three doubles and drives in two in a losing effort.