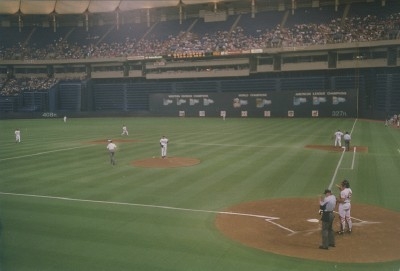 The Metrodome is the best among all of the domed stadiums I’ve seen, which is a little like being the tallest mountain in Rhode Island.  I like its location settled in so close to downtown Minneapolis, and I’m sure that Vikings fans (and, for that matter, Vikings) appreciate the protection from subzero weather in December and January, but I certainly wish that I could have been out in the sun on the Sunday afternoon I began my 1993 Erotic Love and Baseball Stadium Tour.  I drove the sixty minutes up from my sister’s college graduation from Carleton and settled into a month of crashing on friends’ floors.  (Which means, on Jennifer’s poster, the Tour begins with my sister’s name.  Sick, I know, but I didn’t know any other women in Minnesota, so my sister will have to do.)

First, a pleasant surprise:  my seat was in the second row, just a bit to the third-base side of home plate, about even with the edge of the foul ball netting.  Not too shabby…I had spoiled myself with the best seat of

the trip on the first game.  I was close enough to the action that I noticed some

things I wouldn’t have otherwise noticed:  Dave Winfield is an exceptionally large and athletic man…way more impressive in person.  Also, Kirby Puckett’s chubbiness is just as evident from up close.

A couple of the Twins, including Winfield, were chatting with a sixty-ish woman in the front row, best seat in the house.  A season-ticket-holding married couple nearby told me what her story was.  She was an 81-game season-ticket holder who never, ever missed a game.  She worked as a nanny over the winters, but was finished by the spring so she could devote her summers to the Twins.  She was the most knowledgeable woman the about the Twins out there.  “She knew Hrbek was going on the DL before the media did,” they told me, amazed.  I was fairly amazed too.  Working six months out of the year to spend the other six in a dome?  I mean, Fenway, sure, but a dome?

Which leads me to a fairly obvious question, and the first thing I thought of when I saw the artificial turf.  If you had a room in your house that was as big as an indoor stadium, would this be the color of the carpet you choose?  Green grass, well, that’s pleasant.  Green carpet–that’s annoying.  Is there a rule that says the carpet in an indoor stadium has to be green?  Can we select some other color?  I suggest black–it’d be easy to pick up the ball and the foul lines, and teams could save money by cleaning and vacuuming it less often–but that might take away too much light.  Boise State University’s football stadium has blue astroturf. 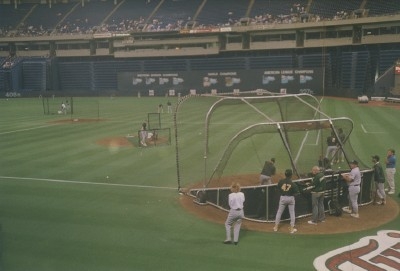 While blue is a fine color, on the rare occasions I see highlights on ESPN, I don’t think “gee, how different and daring,” I think “man, I need to adjust the tint on my TV.”  A dull red might work, but would blend in with the dirt cutouts around the bases.  Does anyone have a more attractive color than green for the few remaining astroturf fields?

One other lesson I learned…always pay attention.  I had my glove, needless to say, as I was in prime foul ball territory (and on an aisle, allowing for greater maneuverability).  Between innings, though, there was a pitching change, and I was focused on my scorepad to close the book on the previous pitcher, when–WHACK!–the side of my seat was hit by an errant throw from, I believe, the third baseman trying to get the ball back to the dugout, or maybe a left fielder. I’m proud to have been focused on the scorebook, but if I’d been looking at warmups, I surely would have seen the ball coming in, and for goodness sakes, I was wearing my glove–I should have led off the trip with a souvenir.  But I wasn’t, and I didn’t.  Buzzard’s luck…but I try to stay more focused now.

The game itself was quite fun…the first six players for Minnesota reached base, four scored, and they had a 4-1 lead after one inning before losing the lead in the top of the 6th, tying it up in the bottom, then giving up two runs in the top of the ninth and only responding with one.  Shane Mack hit two home runs.  I believe that a home run, especially a long one, looks most dramatic from behind home plate…you can really see the trajectory and respect the distance more from as close as possible to where the ball was hit.  I also have some kind of sense that, as much as I hate domes, home runs may look more dramatic indoors than out.  Something about the ball going almost all the way to the other end of a huge building is impressive…outdoors, the ball is really competing against the size of the world, or maybe against infinity.

Oh–this was the second game I ever tried to score…and the last I ever tried to score in pen.  I got a notion that it would be cool to score the whole trip with the same Minnesota Twins pen I bought at the Metrodome…but my scorepad is such a mess that I’ve used a pencil on all 100+ games since.  (Except one where I couldn’t find a pencil to buy.  Safeco Field let me down.)

I got on a plane that night…I had a game in St. Louis, where I’d left my car with relatives, the very next day.

***May 2005:  There is now a taller mountain in Rhode Island.  I like Tropicana Field more than the Metrodome.  Barely.

Shane Mack hit two home runs.  This is especially impressive since he only hit 10 during the entire year.

Eddie Guardado starts in his first major league appearance of what is, to date, an 11-year major league career.  Lasts 3 1/3 innings in a no-decision.

Goose Gossage pitches a scoreless 1 1/3 for Oakland.  I am surprised to see him still alive and well with a 2.53 ERA (that will balloon to nearly five by the end of the season).

Dennis Eckersley gives up Mack’s second homer, deep to straightaway center, but still gets a save.