I’d never been to the Ozarks before when I arrived for the 2008 Spring Break Trip. 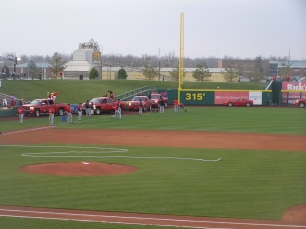 Michelle and I spent the night in Branson–no shows, since we got in too late, but long enough to get the sense that we brought the average age of the town down by about a decade.  We tooled around mountains and caves for a few days before doing Opening Day 2008 at Hammons Field.  Results were decidedly mixed.

First of all, as you can probably tell, the place is physically quite lovely.  It’s faced in the wrong direction–downtown is behind home 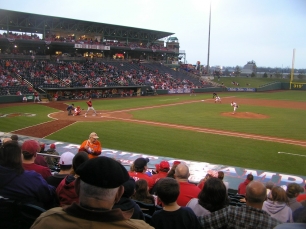 plate–but there’s nice flat prairie beyond the outfield and a Budweiser sign, which means that Hammons Field does well on the regional feel test.  They rolled out the red carpet to start out the year, putting each player in a red pickup truck and driving them around the parking lot of a grand beginning.  The ballpark is new, and Springfield only recently regained affiliated 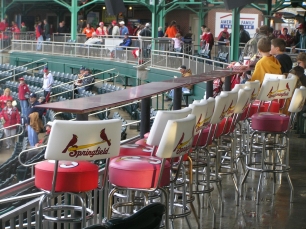 ball, so it’s pretty clear that they’re proud of their ballclub.

But in the end, there were too many problems to be ignored.  Most jarringly, where were all the fans?  Forecasts were grim–I’m surprised that they got the game in, actually–but the rain did hold off, and it was Opening Night, for goodness sake.  Second, when it did rain (for about two minutes in the third inning), a good chunk of people took off, and many others put up umbrellas.  It’s rude to put up umbrellas (there are people behind you, dammit), and 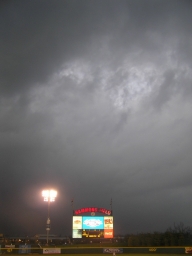 you can wait through the first few raindrops, can’t you?  Michelle and I did what they all should have done–waited a second, then found a dry seat in the back row, where we stayed through the rest of the (dry) night.

Second, we were pretty well astonished by the prices for double-A ball.  (Indeed, these prices might explain why so few people had shown up.)  Tickets were nearly twice as expensive as comparable ones cost us the following night in Little Rock, and 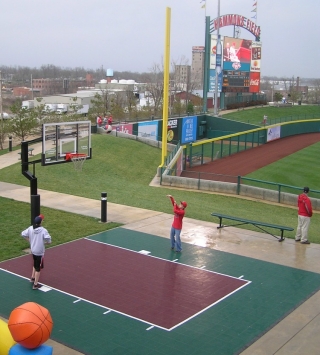 when the woman told me that a 22-ounce bottle of Sprite would cost me four bucks (I declined), I got the sense that the Cardinals thought that “big-time” meant nothing more than “really, really expensive.”  Heck, if memory serves, at Safeco Field I can get an entire vat of soda for about five bucks.  Why bleed your ticketholders dry, particularly during a recession?

Third, the place just didn’t celebrate baseball enough.  In the obligatory place-where-kids-can-run-around-and-burn-off-steam section, there was a basketball hoop and a pop-a-shot.  Nothing baseball related!  To be fair, when I think of basketball, I do think of Springfield.  The bad news is, I think of Springfield, Massachusetts.  I’m not sure why Hammons Field doesn’t have any baseball-related fun for the kids, but they don’t and it felt weird.

Finally, there was the strangeness of Team Louie.  A group of four nubile young women wore windbreakers that said “Team Louie” on the back.  I figured they’d be Louie the Mascot’s handlers, running around 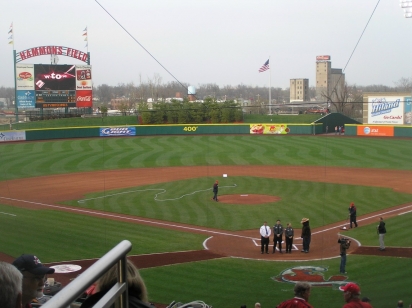 with him and helping kids get to see him.  That didn’t happen, and so I was baffled as to the women’s purpose other than to be hot and young.  A quick internet search reveals that “a brief choreographed dance” is part of the tryout for team Louie.  So, alas, the women were glorified cheerleaders.  I don’t want my baseball teams to have cheerleaders.  They take away from the baseball.

There are certainly a few positives to the place.  The Cardinals have obviously succeeded in capturing the fans of this part of the state from the Royals–at least judging by the immense majority of spectators wearing red on this night.  There is a good, long walk that one can take almost all the way around the stadium–way out beyond the scoreboard and onto a grassy hill invisible 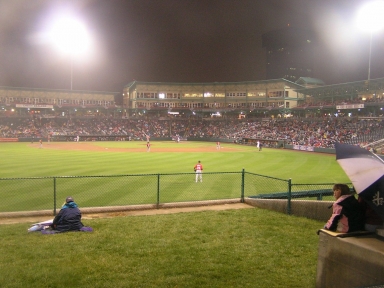 from the field where I encountered a good number of junior-high kids goosing each other.  The Cardinals were conscientious about scoring decisions on the scoreboard.  And the gorgeous clouds in a gigantic sky might be the number one memory I carry with me from this ballpark, as well as watching the fireworks they set off (clearly to celebrate Michelle’s birthday).

So, on the whole, it was a night at the ballpark, and it’s almost impossible for that night to be a bad one.  But when all was said and done, this gorgeous place left me wanting a little more.  Springfield is a little bit out of the way, so I don’t see myself returning any time soon, but I do hope they make Hammons Field into a baseball experience more worthy of the physical beauty of the ballpark.

Regional feel:  7/10
Budweiser, prairie, and Cardinal red.  The ballpark does fine here, although I’d like to see more about southwestern Missouri and less about St. Louis.

Charm:  2/5
Too corporate and expensive to be truly charming. 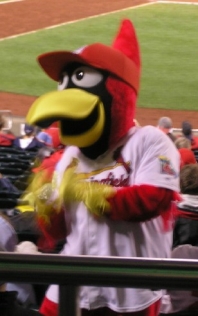 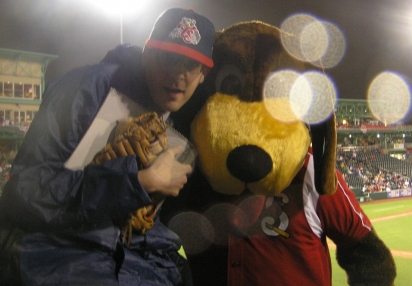 Louie on top, and Fetch, Louie’s pet dog, on the bottom.  I’m fine with Louie, but Fetch is a pretty transparent promotion aimed at the pre-potty-trained crowd.

Pavilion area:  4/5
Would have been a five were it not for the basketball.

Scoreability:  4.5/5
I appreciate how carefully they put up decisions.

Intangibles:  2.5/5
I’m totally ambivalent about this place, which, while pretty, left me feeling kind of flat.

Matt Harrison–who the Rangers got in the offseason Mark Teixeira trade–pitches very well, striking out six in 5 2/3 innings of 4-hit, 1-run ball for Frisco.