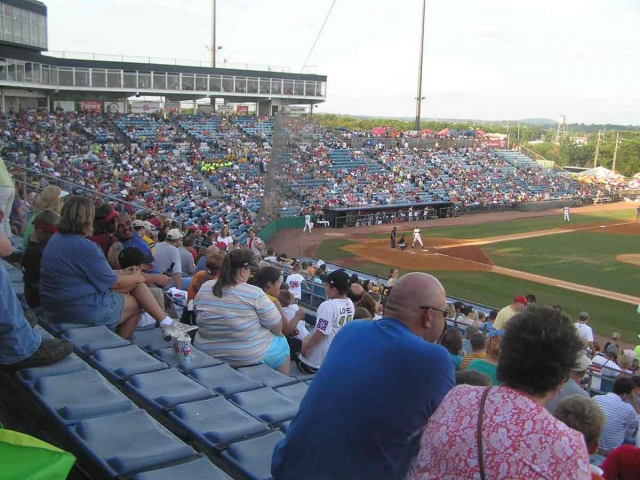 (Greer Stadium was no longer used for baseball as of 2015.  It was demolished in 2019.)
(Click on any picture to see a larger version.)

The best experience I have ever had in a ballpark was my rehearsal dinner–July 29, 2005.  Exactly a year later, I had another marvelous moment.

It sort of happened in San Diego, and it turned into a negative experience.  I had a shot at it in Batavia, and

I caught my first foul ball. 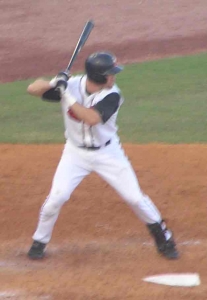 kept sending foul balls down the right field line, where I sat.  I got the glove ready.  Then, it happened.

I’m not very good at judging fly balls, so I’m glad Rob was there.  Not long after the ball left Rottino’s bat, he shouted:  “I think that’s you, Paul!”  The ball started by heading away from the plate, and then started arcing more parallel to the foul line, right along where I was.  I stuck out my glove and intercepted the path.  Bingo!  I caught a real-live foul ball.  On the fly.  In the glove.

My section, and three sections surrounding me, cheered loudly and lustily.  I greedily took it all in by raising both hands.  “Thank you!  Thank you!” I shouted.  No kids came up to me asking for it, and that’s good, because after

waiting a quarter of a century and some 200 games to catch one of these, I wouldn’t have given it up.  I attempted to re-enact the catch, but the resulting picture is poor…the glove was actually in front of me for a backhand stab.  I generally was giddy for the rest of the game.  Rest assured that I’ll try to get out every July 29 from now on!

Needless to say, Vinny Rottino is now my favorite player in the majors.  The Brewers called him up about a month after I caught his ball, and I’m hoping he’ll stay up in 2007.  (2009 Update:  He didn’t stick, and was traded to the Dodgers in July of 2009.) Minor leaguers, remember:  hitting a ball that I catch ALWAYS positively impacts your career.

It’s a good thing that I caught that foul ball, because the ballpark was a snoozer beyond that.  Were it not for the huge guitar scoreboard and the name Sounds, this place would have had absolutely no indication of which of the 50 states we were in.  The view beyond the outfield fence was a non-descript neighborhood to end all non-descript neighborhoods.  There was nothing thrilling to look at.  Add to that a too-crowded concourse, and it’s abundantly clear why the Sounds have decided 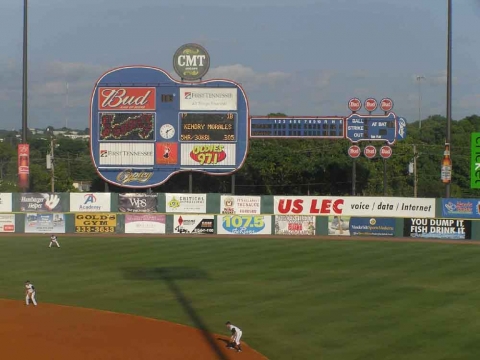 to move to a new ballpark by the river.

I did appreciate one thing about the concourse:  the way that the concession stands were named for past Sounds.  I always enjoy the nods to past players who have passed through, and Dibble’s Den, Bye-Bye Deli, and Magglio’s Pizza are a fun way to do that.

Sometimes, when a team goes to a place that is, as fellow Network of Ballpark Collectors member Tim calls it, “a new cookie cutter,” I can’t help but feel something has been lost. Sometimes I feel like there’s something to the old-school places, but not Greer Stadium, I’m afraid. I don’t have any vivid memory of the place.

Regional feel:  5/10
Beyond the guitar and the name, very little.

Charm:  2/5
Again, not much other than the scoreboard.

Here’s Ozzie.  He’s a carbon copy of the Denver Nuggets’ Rocky.  He does nothing for me.  The name Sounds, however, is excellent.

Aesthetics:  1.5/5
This is an unattractive place with no real view. 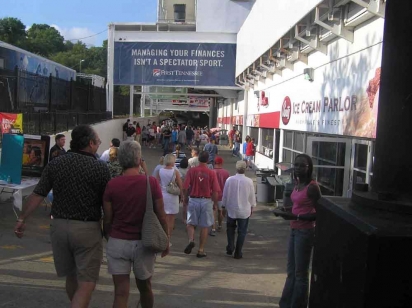 Dull and crowded, but I like the names of the establishments.

Intangibles:  5/5
Catching a foul ball trumps everything.  Simply everything.

Salt Lake spots the Sounds a 4-0 lead, then comes back to win.  Mike Eylward’s sixth inning 2-run double erases the last of that lead.

Matt Wilhite of Bowling Green, Kentucky, got the win in front of many friends and family.

Vinny Rottino goes 0-for-4, including a double-play.