Make no mistake…we were ready.  We were set to dress in multiple layers.  We were going to sit in our front-row seat and hang there in the cold with my Baby Mariners.

Just as we were set 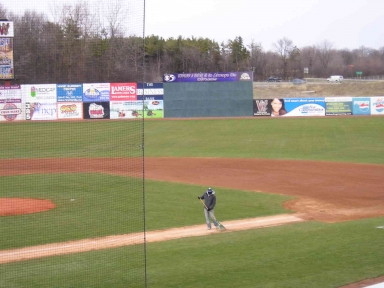 to climb into our long underwear at the hotel, I thought to call the team to see if they’d wimped out of the game.  They had…the game had been postponed.

What?  Come on!  What’s a little sub-zero windchill between friends?  Play ball!

We asked the question:  “Hey, we’re in from Seattle for the ballgame, and we’re not coming back.”  (This usually confuses people.)  Can we get a refund?  The answer:  No.  But they can trade it in for merchandise if we get to their store before it closes in 15 minutes.

Needless to say, we booked down to the store.  When we got there, the cashier was amazed…he said there was no way we could exchange the tickets for merchandise.  He hunted down the guy who told us we could, and I guess pummeled 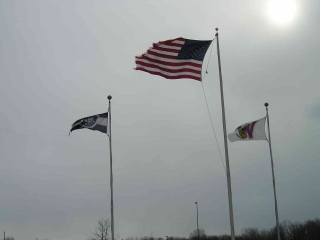 him into submission, because he showed up, tails between his legs, and said “Well, we can get you a free cap from last night’s game.”  Well, it’s something.

While he spent 15 minutes looking for a cap (how could he have misplaced them so quickly?), we checked out the park.  I approached the beautiful “Wall of Fame” prepared for a look at Appleton baseball history and big moments.  Instead, in the central three panels of the display, all I saw was loads of hats, balls, and bats…honoring rich sponsors.  Ick.  (There was a little bit of baseball-related display, but only on the periphery of the display.)  But then, what can one expect from a place so 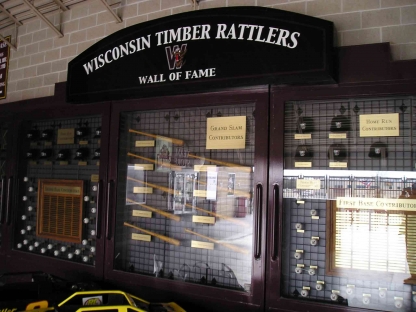 pimped out that its name is officially Time Warner Cable Field at Fox Cities Stadium?  Double ick.  I can’t judge the place since I didn’t see a game there, but I’m concerned it would have felt like San Jose:  baseball not as baseball, but as a promotions transference device.

Idea:  “Girls Gone Wild:  Appleton.”  We hang out outside Appleton-area bars and look for drunken hot college-aged women.  They sign releases and, while we film them, open up their overcoats to show us the parkas 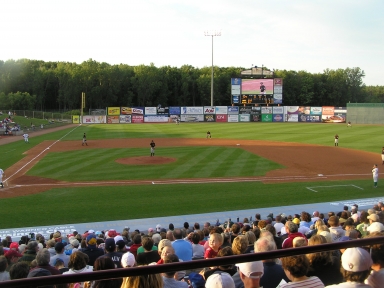 15 minutes later, the guy found us…we had ducked out of the stinging cold and into the office.  He never found the hats…so he brought us baseballs.  Better than nothing, I suppose.  We donated our tickets to whatever charity they team up with–way, way better than our comically sad experience with Huntsville–and headed back to our warm hotel.

UPDATE 2009–We returned two and a half years later when a family gathering had us in Northern Michigan.  I am pleased to report that our concerns aboutan over-promotionalized ballpark were mostly unfounded.  We joined a packed house 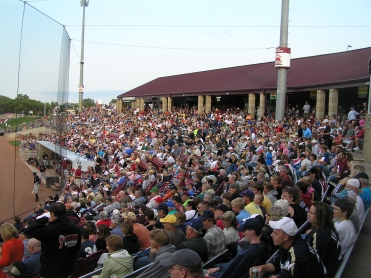 on a Saturday night in what felt to me like a scaled-down major-league ballpark.  And, incredibly, I mean that as a compliment.

In general, I don’t care for it when ballparks try to act big when, in reality, everybody knows they’re small.  But Fox Cities Stadium has figured out that they can take the best factors of big ballparks and still have the intimacy and charm of a small ballpark.

Case in point:  television screens.  I know that small minor league squads don’t have their games televised.  But the Timber Rattlers 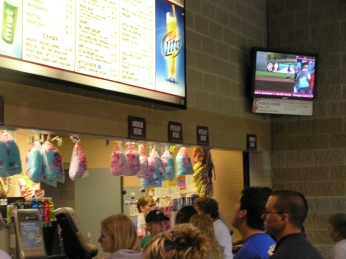 did very well to film the game and have it running live while waiting in line at the concession stands.  This is rarely seen at the minor league level, so it’s appreciated.  Additionally, the Timber Rattlers have a beautiful scoreboard, and they know how to use it.  Unlike too many ballparks who input stats before the game and leave it alone, the Rattlers update the stats with every at-bat, putting up the results of previous at-bats in the later innings.  I’m honestly not sure I’ve ever seen that at any level other than the major leagues.  And as far as a bar one can drink in while watching the game?  Fox Cities Stadium has one–a small-but-nice one.  I seldom, if ever, leave my seat during 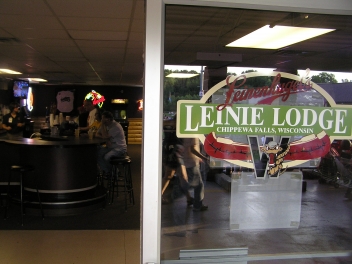 
There’s not a whole lot going for the ballpark as far as panorama goes.  Past left field, there are loads of trees; past center field, a pedestrian overpass; past right field, a small highway.  The natural surroundings don’t do much in the “is there any question where you are” test, but on the interior, there’s a fair amount of Wisconsin to be found.  Most impressively to me was the unquestionably Wisconsin accent of the promotions guy.  I kept wanting him to do more promotions 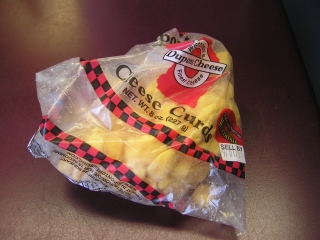 so I could here those bizarre short A’s.  And with plenty of beer and cheese curds around, there was no question as to where I was.

By the way, I had never seen a cheese curd, either on a menu or in person, before arriving at the concession stand at Fox Cities Stadium.  I think I confused the worker a little bit–a high-school aged kid–when I asked if I could see the cheese curds to take a picture of them.  I did not purchase them.  Doubling my cholesterol levels was not on the to-do list for this vacation. 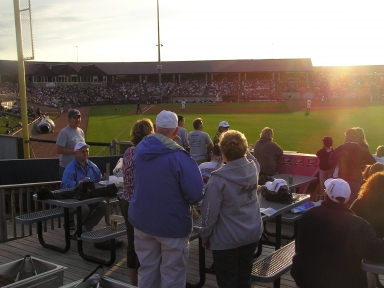 Saturday night.  Sure, there were fireworks, and that might have increased the turnstile count a bit, but I don’t get the sense that these were fireworks fans merely enduring a baseball game to get to the pyrotechnics.  They were there to watch and enjoy some baseball.  The Timber Rattlers helped this atmosphere by letting the game take center stage.  Their promotions were not out of control–they limited them to between-innings shenanigans and announcements, although their goal was to pack as many as possible into those few minutes–but after Missoula, that was a refreshing, comparatively-sedate approach.  On a gorgeous night like this, the fine people of northwest Wisconsin seem to have figured out that they’ve got a good thing going.  Many wandered 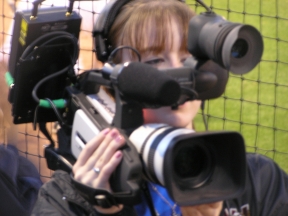 out to the right-field home run porch, where they squinted into the sun and hoped a home run ball came their way (anyone with a home-run-porch ticket who caught a home run on the fly won beer for a year).  Others settled in and cheered for the home team. It was a fine experience.

Appleton also served as my son’s fourth state in which he has seen a baseball game, after Oregon, Washington, and Montana.  It was close to his 12th or 13th game, and my wife and I had already learned something:  the scoreboard camerapeople find babies, especially cute ones like my son, very quickly and very easily.  Out of the dozen-or-so games the boy had attended at this point, this was the fourth or fifth time he found his way onto the scoreboard.  Alas, my camera couldn’t figure out whether I wanted to focus on the scoreboard or on the foul-ball net, but if you look closely, you can see that these blurry people are my wife and son.

Only one quick complaint:  the game operations folks need to be a little more sensitive to injuries.  After the Timber Rattlers’ Sean McCraw fouled a ball off of his foot and was writhing on the ground, the sound guy almost immediately–far too quickly–played “Mambo #5.”  Later, the River Bandits’ Frederick Panejo stayed down after a diving catch:  and before the trainer could get there, they played another song.  That felt a little disrespectful.  I’m not sure they should stay silent the entire time, but couldn’t they start with some PA announcements before having us boogie down?  I think so.

Regional feel:  6.5/10
Pretty good.  There’s not much of a view, but there wasn’t any question that we were in Wisconsin.

Spectacle:  3.5/5
A hair overdone at times, but this is the low minors, so I can live with it. 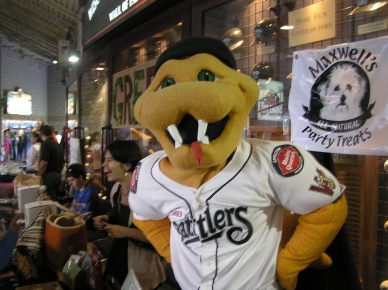 Here’s Fang.  I’m not sure whether this is a locally-appropriate name.  I’m ambivalent about it.

Aesthetics:  4/5
It’s a lovely ballpark in a hum-drum location.

Pavilion area:  4.5/5
Quite nice.  Lots to do, yet one is never outside the view of the ballgame.  I especially like the right-field area.

Intangibles:  3.5/5
A fine night.  They’re docked a little bit for the confusion of our 2006 experience, but they mostly made up for it.