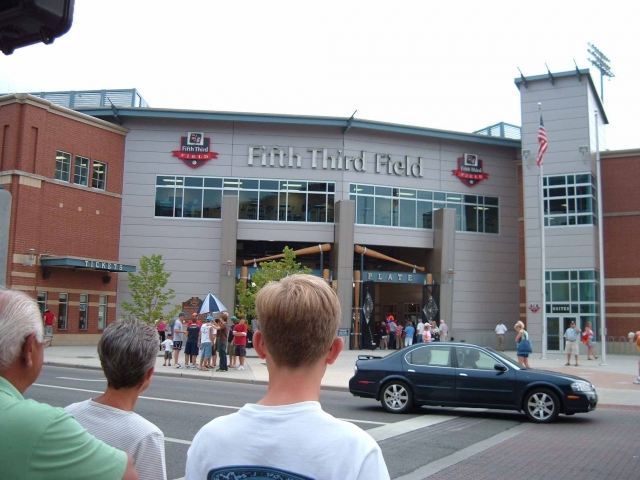 I led off my 2004 summer ELABST trip in Toledo, where college buddy Kristin lived.  Kristin expressed enthusiasm not only to host me and join me at Fifth Third Field, but to join me for the lion’s share of the tour.  We showed up at Fifth Third Field.  Alas, the game never began…the rain stopped a few times, just to tantalize us all, 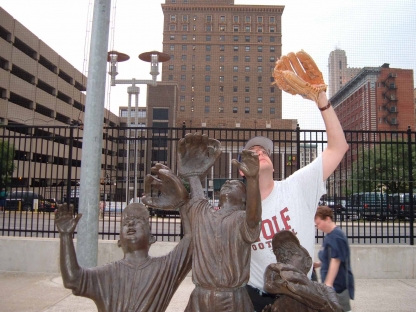 and they even took off the tarp, announced lineups, and sang the anthem…but it was not meant to be.

Even though I spent three hours at the ballpark, I didn’t see a game here in Toledo, and I therefore cannot count Ohio in my state total, nor do I feel right giving the ballpark a score.  I’m certain it would be a very high score–the ballpark is beautiful, nicely integrated into the warehouses of the neighborhood (in the picture at left, the stadium is the shorter building on the left).  It also has local charm, including Toledo native Jamie Farr, wearing Corporal Klinger’s Mud Hens’ hat, making announcements on the scoreboard. 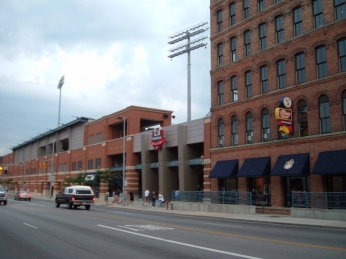 Question:  Are the Mud Hens the only men’s pro team with a female nickname?  They do have mascots of each gender…Muddy and–ready?–Muddonna.  I took the time to pose with Muddonna.  After all, I bought her namesake’s albums in junior high.  The “Lucky Star” video…critical to my development as a heterosexual.  You remember what those dancers on either side of her looked like?  Me either.  But I digress.  I 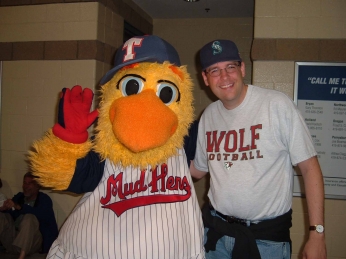 like the idea of two genders for the mascot.  It’s a bit of an affirmative action program for the furry.

In any event, in spite of the lack of score, I thought I’d throw in a few pictures to show what it’s like to be at a rainout at Fifth Third Field.  See the tarp come off…hopes were high!…then see the tarp go back on.  Oh well. 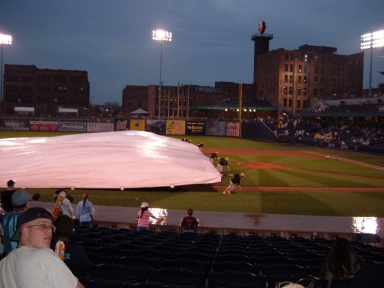