Everett Memorial stadium is my “home” minor league park.  It is about 40 minutes from my place, and Safeco Field is both closer and major league…so my local baseball budget is pretty well filled with the M’s.  Still, I make it up for a game or two a year.  They’re always enjoyable–so unabashedly minor league.  It’s fun.

There’s one word I think of when I think of “unabashedly minor league,” and that is PROMOTIONS.  I knew we were in for a treat when they announced the umpires’ names and said “The umpires tonight are brought to you by Everett Optometry clinic.  Everett Optometry Clinic is not responsible for any missed calls.”  Stupid.  Corny.  Still, kinda funny, even though I normally hate ref/ump 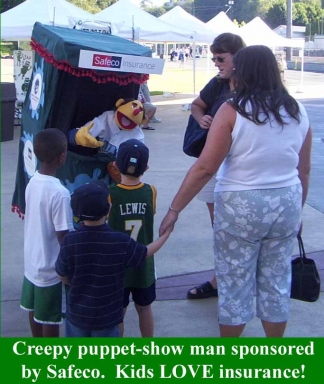 jokes.  And there was some sort of promotion in between every half inning of the entire game except for two or three.  Plus, any patron who buys a program can select for which promotions he or she can be considered!  They have a massive list of every promotion they do every night, and by checking off items on the list, you put yourself in the running for said contest/promotion.  On the night I graded this stadium, I declared myself eligible for about a dozen contests and promotions.  Through five and a half innings, my name wasn’t called, but then:  WOW!  I was the contestant in the Grand Slam Inning Contest!  If the AquaSox hit a grand slam in the sixth inning, I win $5000!  What a wonderful feeling of anticipation…and very, very short-lived.  The bottom of the sixth lasted exactly five pitches.  (Apparently the M’s are not teaching their minor leaguers plate discipline.)  Brian Lentz popped the first pitch to right.  Bryan LaHair grounded his first pitch to first.  And Mike Cox watched a whole two pitches go by before flying to right.  Oh, well–no five grand for me.  But at least I got to hear my name.

This is a ballpark that’s worth getting to early.  Inside the gates are lots of places for kids to jump around, a few wandering mascots, some music, and a football-field sized grassy area in which to play catch or settle in to have a pre-game picnic.  There was also a prominently-displayed lineup board, where I saw something for the first time.  Check out the difference between the elderly fan on the left, who is writing the lineups in a scorebook, and the fan on the right, who is–swear to God–programming the lineups into a Palm Pilot. 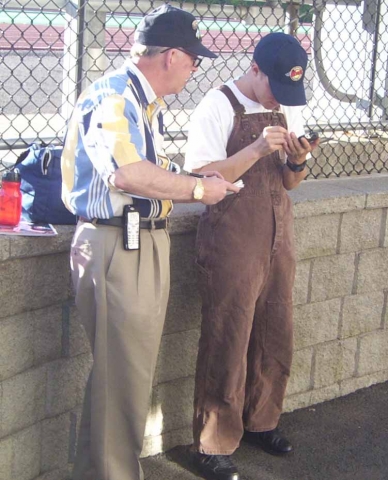 Only in Microsoftland!  I’m sure this will grow more common down the line, but man, I sure hope I never make that switch.

Two mascots.  Webbly the frog is awesome, but Frank the Frank is what it’s all about.  A giant walking hot dog slingshotting T-shirts at patrons!  (I can’t be the only one who thinks of Maude Flanders when this happens, can I?)  So while I’m impressed with both the quality and the quantity of mascots, there’s one fairly severe problem:  accessibility.  Neither mascot stepped off the field of play and into the stands even once.  No hugs, no high fives, no direct interaction at all.  This is completely unacceptable at the single-A level!  Even major-league mascots will get into the stands, frequently to all levels of the stadium.  With only a couple thousand fans on hand and two mascots, each person in the stands needs to be personally greeted.  This highly disappointing shortcoming hurts the score.

Still, however, a fine ballpark and a fun experience every time I go.  The problems here are easily fixed…with some work on the grass and some mascots in the stands, I may change the score later on.

BIG UPDATE:  Michelle and I enjoyed our wedding rehearsal dinner at Everett Memorial Stadium in 2005.  Click here for all the fun!

Regional feel:  7/10
Espresso stands and a view of Mt. Baker.

Spectacle: 4/5
Constant, clever, wonderful, and I could have won $5000…but never interferes with the game.  That said, the score is hurt because mascots never leave the field.

Frank on the left, Webbly on the right.  Multiple mascots, and Frank is a fine idea.

Aesthetics:  3.5/5
Nice overall.  It’s a bit of a strain to see the mountains, and metal bleachers aren’t pretty.

Pavilion area:  5/5
Huge areas of grass to play catch or have a picnic.  Outstanding.

Scoreability:  4/5
Nice job by the PA guy, but there needs to be an “At Bat” notation on the scoreboard.

Intangibles:  5/5
This score has gone up since my first visit–as Everett will always have a place in my heart for hosting my rehearsal dinner.

A funny mental error by the AquaSox’s Josh Ellison.  He’s called safe after sliding into second on a fielder’s choice…he beat the throw.  But I guess he didn’t think so much of his speed…he definitely didn’t think to look at the umpire, because he moseyed right on towards his dugout and was tagged out in the consequent rundown.  (To be fair, I’ve seen a similar error in person by a major leaguer…Quinton McCracken thought an out on a teammate’s rundown was the third when it was the second.  He stepped off second base, and Ken Griffey Jr. snuck in behind him to tag him out for the third out of the inning for the Mariners.  It turned out to be a 7-2-4-6-8 double play.)  So chin up, Josh…happens to everyone.  I guess.

A horrible 19-9 win by the Yakima Bears over Everett, which I mention for one reason only:  All nine of Yakima’s starters finished the game with at least one run, hit, AND RBI.  That’s right…there were no zeroes in the traditional box score.

BRANDON CASHMAN, bay-bee!  Set a Northwest League record (and the Northwest League has been around for 50 years!) by hitting four homers for Spokane in an 18-9 victory over Everett in 2004.  He also tied the record for RBIs with 9.  I’m keeping my eye open and hoping this wasn’t an anomaly.  (January 2007:  It was.  He peaked at low-A ball and is now out of the affiliated minors.)

In 2005, I saw Yakima’s Brandon Burgess hit a home run–notable because I was sitting next to his grandparents.  That was awesome.

Salem-Keizer’s Adam Cowart looked nearly unhittable in short-season A…his ERA was under 1 late in the season when he gave up two hits in 6 innings with 7 strikeouts.  His delivery was bizarre…I swear it looked like he was, um, taking a dump.  He crouches down to a Jeff Bagwell crouch, then pitches…and nobody in the Northwest League could hit it.  Another guy to keep an eye on.  He was fun to watch.

A hilarious 20-7 loss to the Vancouver Canadians at the end of the 2006 season.  Vancouver scored runs in every inning except the fifth; Everett scored all 7 of its runs in the fifth.