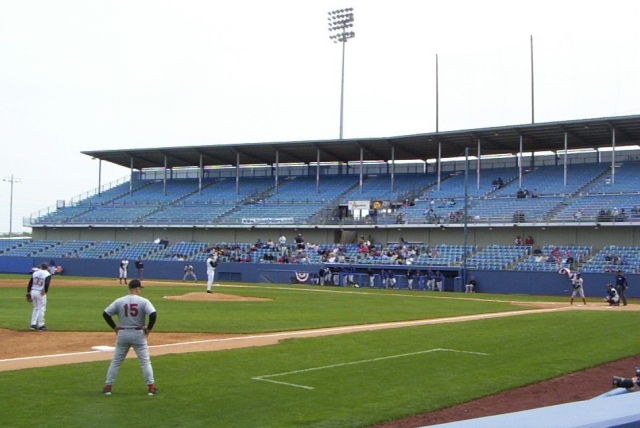 I attended the ballgame in Tulsa on Easter Sunday.  I challenge anyone to find another person who visited Tulsa that holiday who was not drawn there by family or business.  The best part about the trip to (and from) Tulsa was avoiding the interstates.  Just like I had done 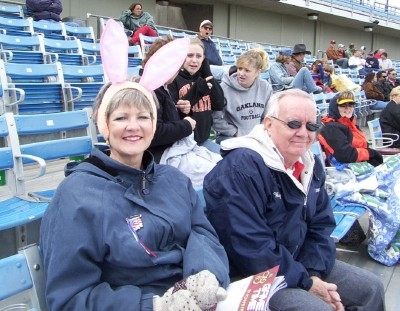 with my father nearly twelve years earlier on our trip to Arlington Stadium, I stayed entirely off interstates–on state and county roads, my preferred mode of travel.  And wow, was it fun.  Driving through the little towns along the way in southern Kansas and northern Oklahoma…with every tiny town the host to one (or more) big churches, and every church packed to the gills with cars.  I must admit, that morning was a little I-love-the-USA moment for me.  Because of my recent ancestry, I have a soft spot in my heart for the Midwest, and looking at all of these packed churches even made my then-lapsed religious self feel like we are a country filled with a lot of decent, kind people.  Sure, if I’d taken the time to step into, say, the First Baptist Church in whatever tiny town and listen to the sermon, I may well have been blown out of my I-love-the-USA reverie by whatever makes-me-embarrassed-to-be-Christian garbage was emanating from the pulpit, but on this morning, I gave everyone the benefit of the doubt.  I drove through the crops on a cool sunny Easter with Jesus Christ Superstar cranked up on my rented car’s CD player.  And I felt good. 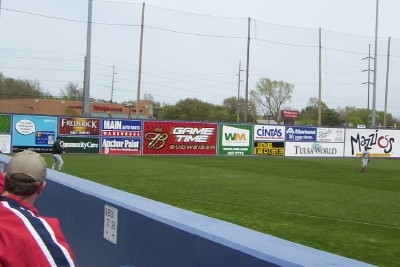 Were it not for the Tulsa World advertisement, would you have any idea what city you were in?  What state?  What region?  There is literally no hint to that in the photo.  We had a Walgreens past left field, a Lowe’s past right, and a city utilities department behind a foul line.  There’s no skyline in view (although within city limits, the ballpark is several miles from downtown, in a suburban-feeling location near the state fairgrounds and an old horse track…cars park on the infield of the track).  There are no natural landmarks to see from the park (the nearly dried-up Arkansas river runs on the other side of town), and not even any local promotion that leaps out at me as “Only in Oklahoma” or even “Only in the Southwest.”  Look, I know we’re losing regional differences in this country, almost to the point where only weather, flora, fauna, and natural landscapes differentiate us.  I bet that, with literally every ballpark on this journey, I’ll be able to sip a Starbucks before the game and head to either a TGIFridays, Outback, Chili’s, or Applebee’s afterwards.  This bothers me, and the ballpark needs to combat that.  It’s not that I’m incapable of grading suburban parks highly, even with our nation’s similarities between suburban locations–Everett, for instance, is in a humdrum suburban location, but redeems itself by providing a huge grassy pavilion and a view of the mountains.  Tulsa does nothing, and as a result, is charmless.

Even the mascot, which I felt was promising at first, fell flat when measured for local color.  The blue-colored bull (with whom I asked an usher to photograph me…only to find when I got home that he didn’t properly take 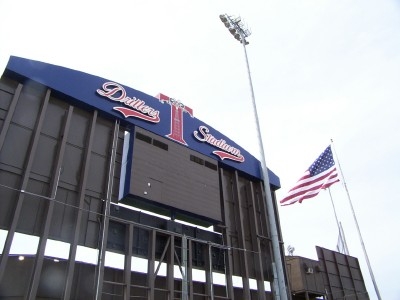 the picture…what’s with my luck in choosing only complete incompetents to take my picture at ballparks?) is named Hornsby.  What an awesome name for a mascot.  I asked the mascot if it was after Rogers Hornsby.  He gave me a thumbs-up.  (He could only communicate with charades.)  I then asked the mascot if Rogers Hornsby was from Tulsa.  The mascot shrugged.  I really wanted Rogers Hornsby to be from Tulsa, or at least Oklahoman.  Didn’t turn out to be true…he just turned out to have played in the Texas League for a while.  Close to a great mascot idea, but no cigar.  There’s just a tiny little hint at Drillers’ history in 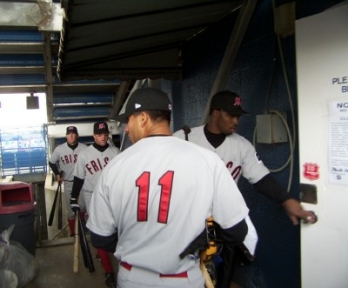 the ballpark, and it’s misplaced…it’s on the inside of the seating bowl, right under the press box behind home plate.  There are nice paintings of past great Drillers, mostly Texas Ranger products of the ’80s and ’90s like Sammy Sosa and Juan Gonzalez.  Surely Tulsa has a richer history than that.  Another near miss.

My ballpark experience was certainly not helped by an astonishing screw-up by Drillers ticket staff.  Not long after my arrival, a good-natured guy seated a few seats to my left asks me a strange question.  “Did they sell you that seat?”  The answer was yes…row two behind third base, right on the aisle.  “Really?  Man.  I bought that seat as a season ticket, and they’ve been selling it to people.”  Geez, I said, do you want me to move?  (Hardly a problem, due to the very low attendance on a chilly Easter Sunday afternoon.)  He said it wasn’t necessary.  Apparently the fine folks at the Drillers had taken his money for season tickets…and then went ahead and sold his seats to anyone who wanted them on Ticketmaster.  Worse, when he called to complain, their solution was this:  that, in the event there was another patron with his seat, he was to tell them to report to the ticket office for reseating.  Amazing.

It was here, in the fifth ballpark of the minor-league quest, that I became conflicted about the “Promotions” portion of my score. 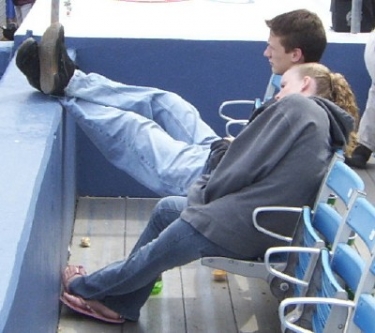 Tulsa did few, if any, between innings.  But it occurred to me that, at least with quality Double-A ball in front of me, I didn’t miss them.  Short-season A ball?  Okay, distract me a little between innings (but never during the game).  So I will take care to remember that only distracting promotions are to be penalized from now on.

So, in the end, the nice people of Oklahoma were the best part of this ballpark.  Although I can’t say I had a rip-roaring conversation with any of them, one did let me stay in his season-ticket seat without sending me to the ticket office as he’d inexplicably been asked to do.  Good thing, too…being in the second row of a quiet, nearly-empty ballpark like this enabled me to hear Tulsa manager Tom Runnells argue a safe call at third base.  (He was actually quite polite in his disagreement…no foul language or personal attacks.)   Another let me take a photo of her with rabbit ears on her head.  And this high-school-aged couple were terribly cute and clearly quite affectionate for each other without any groping or tonsil hockey…it was very sweet to watch.  So it was certainly a nice Easter at the ballpark, but I’m afraid the ballpark left an awful lot to be desired.

I know there’s a lot of Tulsa/Oklahoma City rivalry, but if ever I’m back in Oklahoma, I’ll look forward to visiting the ballpark in Oklahoma City’s Bricktown.  It certainly looks to be superior to Drillers Stadium.

Regional feel:  2/10
Quite simply none.  The Walgreens in left is hardly Fenway’s Citgo sign.  The Lowe’s Hardware in right could be any Lowe’s.  Flat Oklahoma offers no real views from the seating bowl.  Drop me in the ballpark and cover up any text that says “Tulsa,” and I would have no Godly idea where I was.  Only the few photos of ex-Drillers save this score.

Charm:  1/5
Simply none.  Between the utilities plant and the former horse track…nothing to show any personality.  I’m writing this two weeks after my visit, and I barely remember anything about it.

Spectacle: 3.5/5
Nicely and quietly integrated promotions…both quiet and effective.  Strangest promotion…the Kansas City Royals, neither the parent club of the Drillers nor at all close to Tulsa, advertised heavily, including giving away tickets to home Royals games.

Team mascot/name:  4.5/5
As I said, I have minor quibbles with the name “Hornsby,” but the name “Drillers” may be one of the best nicknames in the minors.  Perfectly locally appropriate, unique, and sort of intimidating. The usher screwed up my picture of Hornsby, so instead, I will reproduce this photo of this innocent, completely non-stereotypical mascot from a local Mexican restaurant. 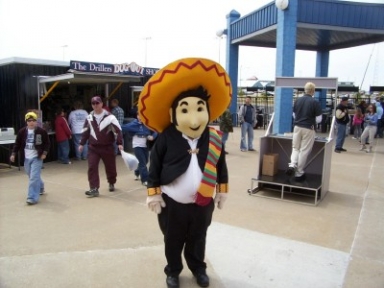 Aesthetics:  1/5
Neither the ballpark nor its surroundings do anything for me.

Pavilion area:  3/5
Not bad.  Good lineups, but not a lot of character.

Intangibles:  3/5
Maybe I was just tired from the drive, but there just was nothing that seemed to impress me on this day.  The game was pretty good, though, which helps.

A pitchers’ duel between Tulsa (the Rockies’ affiliate…the Rockies basically only draft pitchers because they figure no decent free agent will willingly pitch for them) and Frisco (the Rangers affiliate, who had drafted a lot of pitching lately due to a complete lack of it with the big club).  Justin Hampsen and Kameron Loe, the starters, put a lot of zeroes on the board.

RoughRiders reliever Frank Francisco (that’s Spanish for Frank Frank) gives up the only run of the game in one of the most bizarre fashions I’ve ever seen.  Bottom of the eighth.  He walks the Drillers’ Tony Miller, who steals second.  He strikes out Jayson Nix, then intentionally walks Shawn Garnett.  But catcher Josh McKinley lets the ball get by him on the first pitch of the intentional walk.  Passed ball.  First screwed up intentional walk I’ve ever seen at any level, in person or on TV.  So, they finish the walk.  First and third, one out…and Francisco balks in what turns out to be the winning run.  Weird.  Minor league baseball…catch it!