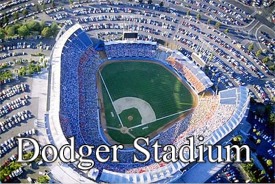 Quick–what are the oldest stadiums currently in use in the majors?  The first two are easy–even a non-fan could name Fenway Park or Wrigley Field, of course.  And then there’s Yankee Stadium, although it’s been completely remodeled and changed to the point where it doesn’t feel old (edit 2009:  well, now its nonexistence gets in the way…).   What’s the next oldest stadium in the majors?  The answer might surprise you.  It’s Dodger Stadium, and it’s an absolutely fine place to watch a baseball game.

I hate L.A.  Absolutely endless freeways all leading to the same strip malls, and I’m sure those mountains are beautiful, but when will anyone ever get a chance to really see them?  It’s an exaggeration to say that all of the fans are laid back to a fault, arriving late and leaving early, but that element is certainly there.  (Next time you see footage of Kirk Gibson hitting his game-winning homer in Game 1 of the 1988 World Series, cast your eyes above the right-field stands and into the parking lot.  That’s right–you’ll see brake lights of at least two cars leaving early! World Series, home team down by one, bottom of the ninth, and people are leaving!)  But once I’m in Dodger Stadium…with those wonderful multiple decks, with virtually all seats very good seats…well, I find myself as enveloped in baseball as I am anywhere.

The park passes the is-there-any-question-where-you-are test, meaning that while sitting in the ballpark, there’s no question that you’re in Southern California.  I especially like the HOLLYWOOD-like sign on the hill beyond the outfield wall…it reads “THINK BLUE.”  The fans that stick around–the ones I talk to–are affable, knowledgeable, and loyal.  There is ample food easily obtained.  And I was there for two only-at-Dodger-Stadium promotions.

In 1993, I was lucky enough to catch old-timers’ day.  Saw every Dodger hall-of-famer you could think of.  Tommy Lasorda played.  The 1993 Lasorda was a somewhat svelte version, but it was still something to watch him run around the bases.  He scored from second on a single, diving into home with a head-first slide.  This was indeed an interesting and comical thing to see.  When the groundskeeper saw Lasorda diving on his way home, surely he worried that he wouldn’t be able to fix up the damage before game time.  On the scoreboard–Dodgers against Dodgers.  And every batter that reached base–no matter how egregious a fielding miscue got him there–was awarded a base hit.  And I can say something not too many people of my generation can say–I saw Don Drysdale pitch.  Yeah, it was an old-timers’ game, but I did see him pitch.

I enjoyed that game about six weeks after I graduated from college, as I was undergoing crash teacher-training in preparation for being a sixth-grade teacher for two years in rural Louisiana.  Laurie, a new attractive female friend (now attending graduate school in educational administration at Harvard), joined me, and didn’t complain when we took three buses about a thousand miles to get to Dodger Stadium.

Seven years later, I returned as a part of the Erotic Love and Baseball Stadium Tour–West Coast Swing.  Saw games on consecutive nights as I tried (and failed) to secure a tryout for a game show.  This time, I enjoyed Hollywood Stars Night.  I arrived two hours early in a too-hot L.A. early evening to see Hollywood Stars play ball.  Let’s just say that the Dodgers’ definition of a “star” differs a little bit from mine.  When the first player they introduced was the voice of the Taco Bell Chihuahua, I knew I wouldn’t exactly be seeing a battery of Neve Campbell and Reese Witherspoon, with Nicole Kidman batting (well, I’d continue to see that in my mind).  Nope.  My favorite actor in the bunch, Gordon Clapp, struck out.  Tony Danza pitched against Corbin Bernsen.  Adam Corrolla and Dr. Drew Pinsky each played.  And Lisa Guerrero, then the obligatory babe on the Fox Sports game show at the time, did an amazingly stupid gag.  She grounded to the pitcher, but ran to third instead of first.  The pitcher threw to first, and the third-base umpire ruled her safe.  Ha ha, how funny, the umpire let the gorgeous silicon-laden babe be safe.  It was awfully stupid, and there wasn’t anyone on the field who was more than a C- or D-list star.  But still, it was an Only In Hollywood kind of moment, where being the voice of a popular fast-food spokesdog will let you play where Koufax and Drysdale once played.

I was stoked to see Kevin Brown pitch, and Kerry, my longtime friend whom I sorta have a past with, is almost as obsessed with Kevin Brown as she is with Mike Sweeney.  (She leads our fantasy league in harassment suits and restraining orders.)  So I called her from the stadium, got her machine, and said “This is Kevin Brown.  I know I’m pitching in a few minutes, but I can’t get you out of my mind.  So tonight, I’m going to go out and pitch a shutout FOR YOU.  It’s FOR YOU.”  And he almost did.  It would have been unbearably cool if I’d actually foreshadowed a shutout for Kerry.  She got a cute miniature teddy bear with Kevin Brown’s number on the back.  That’s actually not a bad souvenir for ten bucks–I recommend it.  They’re on sale for many different players in many different parks.

The people were incredibly nice.  The first night I was there for my ELABST West Coast Swing, a woman did something I’ll never forget.  She saw me scoring the game, and said “You must really be quite a Dodger fan!”  I explained that I wasn’t, explained that I was touring the West Coast stadiums, and she asked a few questions.  Four or five innings later, she asked if I planned on going to Oakland County Coliseum.  I did (although it didn’t pan out–I ran out of money, and a friend’s free accommodations fell through at the last minute).  Right there on the spot, she pulled out her cell phone.  “I have a sister who works at the stadium…maybe I can get you a behind-the-scenes tour before your game.”  Amazing!  She didn’t have to do that.  I could have been an axe murderer.  But she chose to be kind to a passing traveler.  Although she didn’t reach her sister, I am highly grateful that she would take that chance.  The family behind me the next night was just as nice and just as talkative.  So thumbs up to the people of L.A., who were kind to me on consecutive nights.  I’m so grateful to them, that if I could, I’d send them the money to move to Seattle or Denver or somewhere where they actually could see the beautiful mountains they live next to.

BASEBALL STUFF I SAW THERE:

Mike Williams gets his first career win in his second career start.

An awesome pitchers’ duel between Kevin Brown and Paul Rigdon, won on a tenth-inning homer by the Brewers’ Henri Blanco.