Straight up:  I love Coors Field.  This may be sentimentally impacted by the fact I grew up in Denver or the way I’ve seen it change downtown Denver from a place that everyone deserted every night to a place that I can actually go hang out with friends.  I have fun memories of meeting my mom at her work and walking the two blocks

to the game–serious, serious family outings.  But I suspect I’d love it anyway.  The pine trees in the bullpen, the pavilion in left field, the views of the mountains…you could be nowhere other than Denver when watching a game.

The talk has died down recently, but in the first few years of the Rockies’ existence, and in 1995, Coors’ first year, a lot of people talked about offensive statistics in Coors Field being somehow illegitimate.  I remember Mark Grace predicting that the person to break Roger Maris’s home run record would probably be a Rockie.  He was wrong, but that’s not the point–the point is the uproar it caused among some media and fans.  Well, before I continue, I would like to defend Coors Field and the statistics of the players who play there.

–First off, you never hear people talking in reverse, about the horribly deflated pitchers’ statistics of Astros or Cardinals or Marlins or Dodgers or whatever.

“Sure, Nolan Ryan pitched 7 no hitters, but they were all at sea level.”  “Bob Gibson’s 1.12 ERA in 1968 isn’t legit.  Do you think he could have done that if he’d played in Atlanta or Yankee Stadium?”  “Sandy Koufax did all of that in a pitchers’ park!  Let’s add a point to his ERA before we truly compare.”  Ridiculous.

–Second, a whole lot of players have inflated batting statistics from hitting in bandboxes.  The Polo Grounds was only 257 feet down the right field line.  Mel Ott’s career numbers are therefore unfairly high, and Ott would not have succeeded as well in another ballpark.  Should we give him an asterisk?  No.  Neither should we tinker with Andre Dawson’s 1987 MVP award for the Cubs or Jim Rice’s career home run numbers.  You play where you play, and you can’t penalize a player for exploiting his environment.

–Third, Coors Field already has very, very deep dimensions…over 330 down the lines and quite deep in the alleys, 5-10% more than most other stadiums.  Scientists tell us the ball travels 5-10% farther at a mile high than at sea level.  I will grant that people will hit the ball more often at Coors, because curves 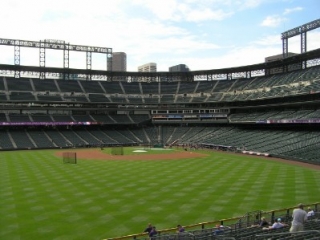 don’t curve as much, sliders don’t slide as much, and knucklers basically don’t knuckle at all.  But what are you going to do, back the foul poles up to 360 or 370?  Make Coors lead the league in triples and inside-the-parkers instead of in traditional homers?  Again, ridiculous.

–Finally, let’s take the case of Andres Galarraga.  Some believe Coors saved his career.  Remember when Galarraga hit a home run of over 500 feet, way up into the third deck (and still rising), that original estimates put as the longest homer ever, longer than Mantle’s?  So do I.  It was at sea level.  In Florida.  Off of one of the best in the biz at the time, Kevin Brown.

So let’s stop talking about this altitude crap, okay?  Okay.  (UPDATE 2009:  The use of the humidor has totally removed all relevance from this argument I wrote so testily in 2001, of course.)

off my chest, let’s talk about Coors again…

Dad had season tickets the year of my semi-obligatory Overeducated Generation X Member’s Return To The Parental Home.  I sold bets at a dog track (yes, really) and generally was surly and eagerly awaiting saving the money to get out of the folks’ basement.  The trips to Coors were among the few bright spots of that year.

We sat in the 25th row, just to the first-base side of home plate most days, right behind what clearly were seats set aside for family and friends of the visitors.  Somebody’s cousin from Colorado Springs or somebody’s buddy from Boulder was always in front of us, silently rooting for the opposition.

One group was having a lot of fun.  It was the brother of an opposing infielder I won’t name and all his friends.  They asked us all to shout Happy Birthday to him simultaneously.  I did it.  I mean, what the hell.  But they were mostly boorish creeps.  When I’d see this player on TV later, I’d tell my dad this was the guy whose brother he hated.  He’d roll his eyes at the memory.

Twice we got foux-foux tickets in wonderful places.  Dad got tickets from the hospital in the second deck, right at first base, which included–honest to God–a buffet.  So I assembled a ham and cheese sandwich on a sourdough roll and settled into my seat, where an usher let me know that if I wanted anything else, I should just wave a menu.  Dad arrived a few minutes later and asked me what I thought of the seats.  I announced that the quality of the seats had convinced me to go to medical school.

Another time Dad’s testosterone got the best of him at a charity auction, and he outbid all comers for a set of four three-rows-behind-home-plate seats and restaurant privileges for a game against the Reds.  I took Jennifer, the namer of the original Erotic Love and Baseball Stadium Tour.  Jennifer elected not to tell the then-boyfriend that she was going to a game with me, which made me feel special–like a threat.  Dad took Mom (as usual–at least I never saw him with another date).  I love being behind home plate, and hated leaving it for the middle innings to dine behind plexiglass near the top of the right-field foul pole.  Who the hell wants to watch a (live) baseball game at a restaurant?  You can’t really cheer, even home runs, since everyone’s having conversations at their table.  The plexiglass makes the game seem like just a rumor.  There’s nowhere on the table to put my scorecard.  (I announced that I was going to “score under the table.”  Dad said I could do that if I wanted, but it was best not to share such personal information with him.)  In the stands, I engage in long, blissful, not-baseball-related conversation with whomever I’m with, all while both of us look forward at the game.  In the restaurant, this feels rude…I feel like I should make eye contact with the people at the table while talking to them, so my equally unappealing options are to ignore my friends and family to watch the game, or to miss the game to talk to my friends and family.  I’m anal enough about scoring that this is actually a fairly tough call.

All in an unmistakably Rocky Mountain setting.  It’s a great ballpark:  one of my favorites.

UPDATE 2008:  After a 10-year hiatus, I returned to Coors for a few games in 2008 as I introduced my wife to the locations of my Colorado youth.  It is interesting to re-visit this park with new eyes; all of my previous visits had been before this website existed.  The ballpark remains one of my favorites.  The way that downtown Denver peeks up beyond

the home plate stands and that the mountains are visible in the distance makes this an unquestionably Colorado experience.  The home runs have been reduced since MLB gave the Rockies permission to keep their baseballs in a humidor (soggy baseballs don’t fly as far).

I noticed some stuff in the ’00s that I would have missed when I was a regular in the ’90s.  First of all, they’ve added some art (or at least I’ve noticed it for the first time).  My favorite piece was a mural behind the batter’s eye that depicts what life might have looked like on the site of Coors Field from Native American times to the first pitch in 1995.  It’s a cool progression of history.   They’ve also added a plaque to commemorate the 1998 All-Star Game, including winning manager “Jim Hargrove,” who I guess was a last-minute replacement for then-Cleveland manager Mike Hargrove. The purple row–row 20–near the very top of the

And, incidentally, if anyone wonders where Santa works during the summer, it’s in the Coors Field elevator by the left-field foul pole.  Here he is with my wife, who is both naughty and nice (after all, she’s 3 month pregnant for this photo).  Check it out…his name tag actually says “Santa–North Pole” and co-workers actually call him that.  “Ho, ho, ho!  Only 136 days left!” he told us.

Game 1 of the 1995 NLDS.  Braves 5, Rockies 4.  Chipper Jones hits two homers, including the game-winner in the ninth. The Braves turn four double plays. The Rockies do just enough to Greg Maddux to stay in the game–including a Vinny Castilla home run.  But Don Baylor goes to his bench too often, so that by the time the bases are loaded with two out in the ninth and the pitchers’ slot due up, nobody is left to pinch hit.  He uses Lance Painter, a pitcher, as a pinch-hitter, and he strikes out against Mark Wohlers to end the game.

Andres Galarraga goes 6-for-6 in a game against Houston.

I see a game in which opposing pitchers, Kevin Foster and Marvin Freeman, homer off of each other.

In my 2008 return, Lastings Milledge hits two home runs in one game for the Nationals.

Greg Maddux picks up a win for the Padres–13 years after I watch him pitch here in a playoff game for the Braves.