(Cooper Stadium is no longer in use for baseball as of the 2009 season.)
(Click on any image to view a larger version.)

To be sure, there were quite a number of issues with Cooper Stadium.  Its age shows, and not gracefully.  I dislike the ancient PA system, the charmless pavilion, and the less-than-understated Carmina Burana playing

as the team takes the field.  However, this July evening turned into a marvelously fun evening with loads of friends–an evening I was pleased to have.

Rob, Yolonda, Michelle and I made it to Cooper Stadium after a day at South Point, Ohio (near the tri-point of Ohio, Kentucky, and West Virginia).  Buddies Joe and Alison gathered loads of friends and led us to the tenth row behind the third-base dugout.  As happens so many times when I get together with buddies for a ballgame, there were many bizarre and memorable events to pass along.

For starters, the whole bunch of us nearly died in the second inning.  The Clippers’ Jeff Karstens pitched to the Bulls’ Elijah Dukes.  He must have fooled him very badly on a pitch, because as Dukes missed for strike two, he released his bat and it went flying behind him.

And right towards us.

Right the hell towards us.

Even if I had wanted the bat and been foolish enough to reach up for the bat, it likely would have just hit my forearms.  So I joined all of my friends in ducking down very low.  I did not want to get hit by a flying bat.

As buddy Joe (wearing the Orioles hat in the photo) put it, “I’d prefer to go the rest of my life without the little voice in my head saying ‘you’re not ducking deep enough’ ever again.”

As we dusted ourselves off and made sure all of our appendages remained, and as we confirmed that the people a couple of rows behind us were also unhurt, we missed Dukes grounding out to third.  We also missed Dukes being ejected by the home plate umpire.  This ejection led the Devil Rays to finally get so fed up with Dukes (in part because he had earlier said that “the major leaguers shower in Perrier while we get sewer water”) that they suspended him for the rest of the season.  I appreciate the D-Rays’ priorities.  Only AFTER he threw a bat at me did they toss him.  Indeed, perhaps

the D-Rays knew that I was a sports official–in the year when Delmon Young chucked a bat at the home plate umpire, I would merely be the latest official a Durham Bull threw a bat at in 2006.

When I wasn’t in danger of dying, there were a few things I liked about Cooper Stadium.  They did a fine job respecting the Clippers’ history, which, as of 2006, meant New York

Yankees’ history.  I love ballparks that have lineups from past years on display, and Cooper Stadium had artists’ renditions of lineups from every year from the Clippers’ history as a Yankees’ affiliate.  The mixture of all-time greats with who-the-heck-is-thats is one of my favorite parts of being at a ballpark, and Cooper Stadium does it well.  As of the end of the 2006 season, the Yankees ended their relationship with the Clippers.  I do hope that they keep the old Yankees’ pictures up; when I’m at a minor league ballpark, I want to see the local minor

league team’s history, not the history of the major league team.  Wichita, Tulsa, and High Desert all celebrate past minor leaguers from who played at that park even after affiliate shifts.  We’ll see if the Clippers have that same sense of history, or if their new parent club orders the relics of recent Yankee history taken down.

No other aspects of the ballpark blew me away.  I was a little taken aback by the fact that a cemetery is visible beyond the outfield fence.  When my mind and eyes wander during a Clippers’ game, they wander to headstones. A particularly massive home run at Cooper Stadium would not impress the fans so much as remind them of their mortality.  The pavilion is typically dank and dull.  They try to make it up with a miniature golf course.  I’m not a big fan of such unnecessary distractions from the baseball–any fan who’d prefer golf to 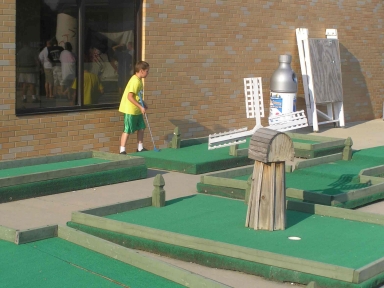 baseball isn’t a fan at all–and on top of that, the mini-golf course is so poorly and hastily assembled that it’s actually worse than it could be.

This is also my second visit to a Yankees’ affiliate, and the second time that the team played “New York, New York” after a victory.  I hated that just as much here as I did in Battle Creek.  We’re not in New York, and these aren’t the Yankees.  Let’s keep that music special for Yankee Stadium.

Occasionally, it’s a close race to actually be a charming old ballpark–the old, covered seating with beams obstructing views is a blast from the past–but I’m afraid that there are just too many negatives.  Nevertheless, I’ll probably be back. With so many friends so close by, I’ll certainly be back to see if they do any upgrades–and if those upgrades will maintain the current sense of history.

Charm:  2/5
Not much.  Old in and of itself does not mean charming, and Cooper Stadium demonstrates this.

Spectacle:  3.5/5
Not bad for the triple-A level, although the promotions they had were occasionally annoying. 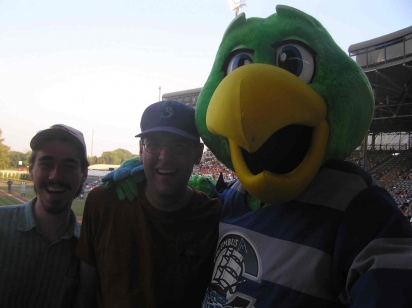 Joe, me, and Krash the First Mate.  Not pictured:  Lou Seal.  Nothing offensive or impressive about any mascot-related matters.

Aesthetics:  2.5/5
Sort of old and dusty–and the view is of a cemetery, which is creepy.

Fans:  5/5
Great friends.  I look forward to going to the new place with them.

Intangibles:  2.5/5
I had a fun night, but in the end, this place didn’t leave me with a positive impression.

The Clippers rough up the Bulls’ Doug Waechter for four first-inning runs.

Columbus’s nine runs include five unearned runs off of four Bull errors, including a pair by B.J. Upton.