Municipal Stadium was vacated by the Indians in 1994 and demolished in 1996.

Out of principle, I feel like I need to put a domed stadium at the bottom of my rankings list, but this cavernous, horrible, termite-infested abomination tempts me to rank it even below the Kingdome, Metrodome, and Astrodome.  Even on the fourth day of summer, it felt cold and grey and miserable, and with 13,225 elbowing their way into a stadium that seats nearly 80,000, it also felt lonely.  My visit was during the Tribe’s last year in this place, which, not surprisingly, coincided with their last year of 40 years of doormathood.  My scorecard has the names of the people who would turn it around (the batting order begins with Lofton, Kirby, Baerga, and Belle.)  But June of 1993 was still a sorry time for the Indians, and I got to see a little chunk of that.

I was with the largest entourage to accompany me to any game on the Erotic Love and Baseball Stadium Tour.  Shelly and her friend Jane accompanied me and my good friend Chris (who would later join me in Milwaukee County Stadium, making Chris and Shelly the only people to join me in two cities on the ELABST).  There were plenty of good seats to be had (imagine!), so I was excited to wander into our spots about even with first base (with plenty of empty wooden bleachers all around us).  Just as I’m settling into starting my scorecard, I hear an inimitable voice behind me: 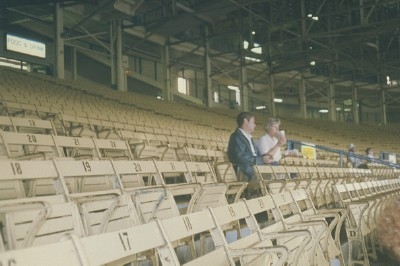 And I’ll be damned, it was Perry, my favorite college professor, one of those larger-than-life figures that college students are terrified by, but whom I had grown to know well as my honors advisor.  He told me that he goes to one game in Cleveland every year, and as this would be the only game I would ever see in Municipal Stadium, the odds of us meeting by happenstance were awfully remote.  Of course, I didn’t want to disappoint the tough English professor by stammering and stumbling through an answer, so I held up my scorebook and showed him the games I’d seen, the cities I’d been to, the places I was about to go.  It was completely unexpected, and therefore surreal in the way seeing anyone or anything out of an accustomed context is bizarre.  He and his wife invited me to their place for grilled steaks whenever I could make it the two hours down, and sure enough, I was hanging out by the grill with the two of them a few days later.  Perry and I remain in cordial and sporadic touch to this day, and I’m not sure we would were it not for the coincidental meeting to see the bottom two teams in the AL East slug it out at Municipal Stadium.

I’m convinced that it wasn’t just the teams or the game that were awful, it was the atmosphere.  It was so bad that, although the game didn’t even last two and a half hours, it felt interminable.  Shelly, who had enjoyed the game at Veterans Stadium so much, joined Jane in cheering every out–because each out brought us closer to leaving.  (Shelly and Jane spent a good deal of time mulling over Shelly’s dad’s massive collection of historic baseball hats to find the perfect fashion statement.  Too bad, this being Municipal Stadium, that nobody was there to see it.)  The Indians’ ballpark staff tried to make the best of it:  when the Indians were rallying, a figure would appear on the 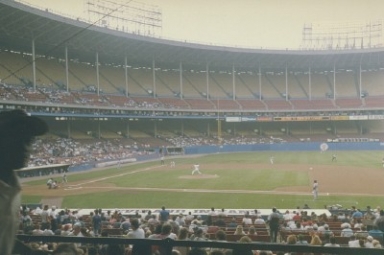 scoreboard grabbing an empty wooden seat on either side of him and repeatedly opening and shutting it, encouraging the fans to do the same.  It made quite a racket…way more than the 13,225 fans could do.  The message:  “Hey, we may be so bad and have such a lousy stadium that we can’t get people to come to our games, but unlike your popular teams in nice stadiums, we can use our empty seats to make noise.”  I found it pathetic.

One other scoreboard gaffe involved the Indians’ shortstop, Felix Fermin.  The following informational graphic appeared on the scoreboard during one of his at-bats:  “Felix already has more at-bats than he had last season, and has almost as many hits.”  Surely it would have been more effective simply to tell the home crowd:  “Felix isn’t hitting as well as he did last season.”  Why didn’t somebody catch that?  I know I did.

The fans of Clevleand deserve the beautiful Jacobs Field.  One of the reasons it is so popular, I am sure, is because the fans were freed from this decaying piece of garbage called Municipal Stadium.  I hope that the real fans–season-ticket holders who huddled under blankets, protecting themselves from Lake Erie, night after night, year after year, seeing so many terrible teams–remain in the front few rows at the Jake, finally getting the pleasure they’ve earned.

Ricky Bones combines with two relievers on a three-hitter.