Civic Stadium was no longer used for affiliated minor league baseball as of the 2010 season. Fire destroyed the structure in 2015.

As I approached Civic Stadium for the first time, I absolutely fell in love with the place.  Beautiful.  Charming.  Venerable.  Looking much the same as it did when it opened back in nineteen-twenty-whatever (just guessing on the date, but it has that Fenway and Tiger Stadium boxed-up, 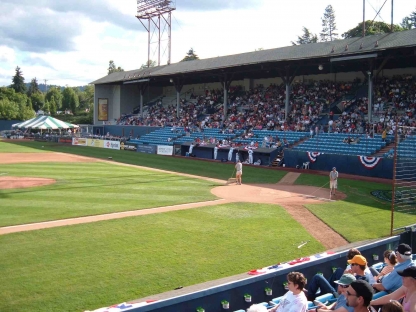 team-logo-painted-on-the-outside-wood, held-up-by-beams feel about it.)  As I walked in with 10,000 others for fireworks night, I was convinced that I was in  for something special and that I’d feel about this beautiful old place the same way I did about Fenway Park, which is to say, totally entranced.  Over the course of the next few hours, however, I fell out of love with Civic Stadium.  There was just too much troublesome about it.  The experience was akin to seeing that my blind date looked like Sue Bird or Julie Delpy or Claire Danes, then finding little things wrong…okay, she’s got an annoying, nervous laugh…okay, she’s a whacked-out crystal-worshipping new ager…okay, she’s had three drinks to my one…until I finally, the many flaws become overwhelming and I can’t let the original charm win out.

I can already feel traditionalists breathing down my neck on this one, since there are so few places like Civic Stadium left in the world.  But my night at Civic Stadium was, if nothing else, an explication of reasons why

stadiums no longer are designed like Civic Stadium and an argument that maybe the changes since are progress rather than regression.

Make no mistake.  I loved the look of the place!  It had all the charm of bygone days.  I felt connected to every fan who’d ever gone into the place.  The beams, the real grass, the bizarre asymmetry of it (the seating bowl reaches almost all the way down the right field line, but doesn’t even make it as far as third base along the left field line).  It’s accidental charm, and I love it.

The Eugene fans were fantastic.  This was a sellout for fireworks night.  Michelle The Girlfriend and

I arrived an hour early (after a wonderful day meandering down the gorgeous Oregon coast) to poke around the place and to find good general admission seats.  Whoops!  We needed to arrive a lot earlier than that to get good seats.  We did okay–only about 3/4 of the way up to the top, only about 3/4 of the way to the end of the right-field stands–but I was highly impressed with how early the fans showed up to claim their stake.  Maybe it’s different on a non-holiday Tuesday night in August, but even so, for so many to arrive that early speaks well for the Emeralds and their fans.

Here’s where the problems begin, though.  Although the stadium technically can hold 10,000, it certainly can’t do so comfortably.  While I’m sure that the season-ticket holders were enjoying 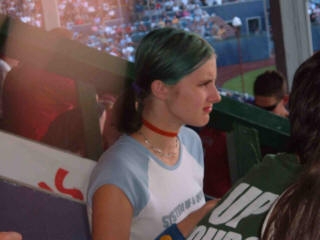 their seats with backs and arms on them, we in general admission were horribly uncomfortable.  Whenever anyone wanted to leave (and I’m trying not to harbor enmity towards the butthead who left and returned to my row FIVE TIMES during the game), the entire row would either have their feet stepped on or their backs jostled.  There just wasn’t enough room to sit.  Even while at rest, I had to position my knees and feet just so to avoid contact with the fine young family in front of me.  Net result:  as the game progressed, we all became more and more uncomfortable.

Strangely, the Emeralds did little to keep its large crowd–who clearly were rearing to have a very good time–active.  Music choices were baffling.  “Deep in the Heart of Texas”?  What the hell?  Why not just throw in “Chicago,”

“New York, New York,” and “God Save the Queen” while you’re at it?  Why not throw in “Streets of Philadelphia,” just to be both geographically inaccurate and breathtakingly depressing?  No wait…they DID play “My City in Ruins”!  Strange, strange choices.

STILL, I was eager to enjoy this beautiful old ballpark, but I actually became a little concerned for my safety at some points.  A hard foul ball was smacked back into one of the beams on the first-base side and shattered a light bulb there.  Surely, at some point in the last 80 years, someone must have at least realized the necessity of putting a cage around that.  But later, things got even more bizarre.  In the eighth inning, the entire bank of lights went out on the first-base side. 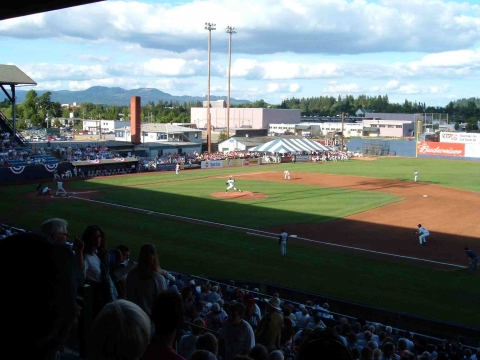 take his first pitch from Eugene pitcher Jake Upwood when the lights went out.  Babineaux called time,  which was granted, but the home plate umpire seemed to want to continue play in the twilight combined with outfield lighting.  But when the Salem-Keizer manager stepped in, play was delayed while they fixed the lights.  Okay, I understand that maybe this could have happened anywhere.  But I doubt it.  The lights over the left field pavilion looked only slightly less old than the stadium itself, and they’re the only ones that went out.  Plus–and am I the only one who could possibly have been thinking this?–if it’d been a blown fuse or a small explosion that caused those lights to go out, those wooden bleachers would have taken about a minute and a half to become a hellish inferno, and when this sucker was built, emergency exits and sprinkler systems were not exactly high in architects’ minds.  So while I’m sitting and thinking about the tragedy at England’s Bradford City football grounds, the Emeralds’ staff could be doing some things to make sure we’re all having a good time, like playing some music or having the mascot run around and do the good stuff mascots do.  Two problems:

1.  The music people.  At a time the audience needed something to do–“Minnie the Moocher,” “YMCA,” hell, even the damn

Macarena–the sound guys played Abbott and Costello’s “Who’s on First,” the radio call of Bobby Thomson’s “Shot Heard Round the World,” and “Dueling Banjos.”  Audience participation possibilities?  None.  So we sat in our uncomfortable seats for 29 minutes doing nothing.

2.  The mascot.  There isn’t one.  Come on.  Is this even possible in the low minors?  I must admit, I didn’t notice its absence until about the fifth inning, but I felt a little bit cheated, like if I’d showed up to an NL game and found they decided to use the designated hitter.  It’s just not the rules!  Low minor league teams simply MUST have a mascot…and during the big delay, this was a notable absence, since all we had to look at were the two umpires sitting around waiting for the lights–lights that were probably only slightly younger than Thomas Edison’s original–to kick back on.

In the end, as much as I wanted to love this place, I just couldn’t overlook these problems.  I felt uncomfortable.  I even felt a little unsafe.  And I totally felt like I was missing part of the minor league baseball experience.  Even the fireworks show didn’t redeem it…it only lasted about 7 minutes (although they had 15 minutes worth of fireworks…they just fired them all off in 7 minutes, thus eliminating any sense of buildup or climax to the show).

Michelle and I have agreed that, if we win the lottery for more than, say, $100 million, we will purchase the Eugene Emeralds and clean this stadium up a bit…maintaining its old charm without sacrificing the many, many comforts that Civic Stadium sacrifices.  Yes, I am a traditionalist, but not militantly so, and Civic Stadium goes beyond my limits.

UPDATE:  I received a nice email from a University of Oregon student who works concessions for the Emeralds, encouraging me to give the team another chance–saying that, among other things, the team “dreads” the July 3rd/4th games.  And I also got the sense that many of the problems I had with the ballpark were a result of a crowded night.  So Michelle and I headed back down to Eugene for a random Saturday night game in 2007.  The team impressed me with their low-key calmness that ngiht, and I found it was worth every penny not to sit in general admission.  I will adjust my score a little bit accordingly (although that first visit was so frustrating that it weighs a little bit heavier).

Regional feel:  8.5/10
Quite lovely here, with local promotions, a view of the Cascades, and many fine folks who clearly were from Oregon and Eugene.  No question where I was.

Charm:  3/5
Yes, Civic Stadium has charm due to its age.  But I don’t find cramped, backless seats, people colliding with my back or stepping on my toes every time they leave, endless concession lines, my toes up some poor person in the next row’s butt, a lengthy power outage, and the very real fear that we could burn alive to be very charming. (But on the second visit, it was quite lovely.  Just don’t go there on a night where it’s packed unless you have a reserved seat.)

Spectacle: 1/5
Could have used a bit more for low-A ball.

Aesthetics:  5/5
Say what you will, but the place is gorgeous.

Scoreability:  4/5
Lineups were available.  Some close decisions were not made clear, however.

Intangibles:  3/5
Pluses:  Good game, fireworks, a polite letter from a ballpark worker that did all but apologize for the lamentable first night.  Minuses:  Power outage, aching back, and fireworks show that packed 15 minutes worth of gunpowder into 7 minutes.  I didn’t leave satisfied on any count…until three years later.

Eugene’s Colt Morton (who wears #45…get it?) appears to be a stud-in-the-making.  He homered twice, which made it 4 homers in 5 days for him.

Salem-Keizer’s Chase Smith gets his first professional loss without surrendering a hit:  a leadoff walk, a sacrifice bunt, a deep flyout, and a wild pitch score Craig Johnson with the winning run.

Mitch Moreland homers to put the 2007 game in the bag for Spokane.