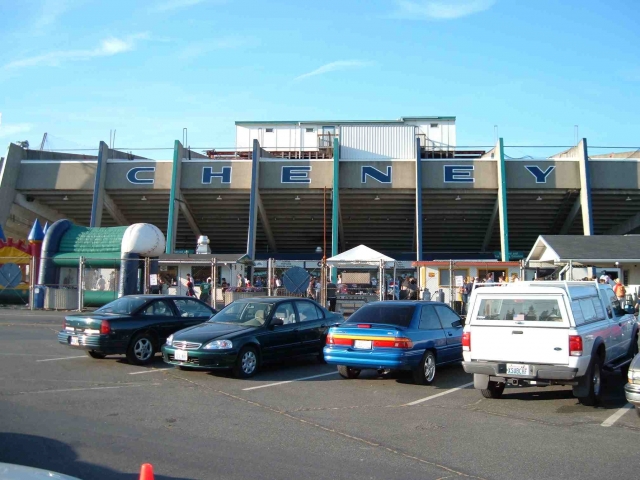 In the Puget Sound region, Tacoma is the butt of a number of jokes.  Its industrialization, crime problems, and, simply put, aesthetic unattractiveness lead stuffy, rich Seattleites to refer to “the aroma of Tacoma.”  This stereotyping led me to expect that Cheney Stadium, the AAA ballpark in Tacoma, 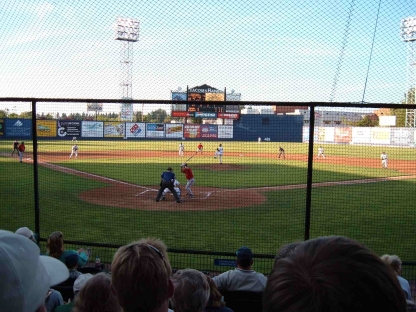 wouldn’t be a great place.  I was wrong.  Cheney Stadium is a fine place to watch a ballgame, and even better when watched with enthusiastic seven- and nine-year-old nephews.

It’s easier to teach youngsters to score than one might think.  My then-eight-year-old nephew did a fine job scoring a Mariners/Orioles game I took him to.  It was a pitchers’ duel, which made it easier…very few baserunners to follow around the bases, which is the tricky part of basic scoring.  So at the Tacoma game, I worked on the six-year-old.  We started with the very basics…color in runs when they’re scored, and a K means a strikeout.  Soon enough, David was working with me.  He started by filling in the runs that were scored.  He worked intently, like this was the world’s smallest coloring book.  Adorable.  He then  wrote in a few K’s for me.  This, also, was cute.  It’s a challenge for a six-year-old to write small enough to fit into the scoring box.  David concentrated so hard on writing the K that he actually came close to scraping through the page.

The ballpark itself has surprising charm.  It’s fairly old, and the age shows well.  The pavilion area was  excellent–it included loads of minor-league promotions such as an opportunity to take kids’ pictures on top of horses (this would be the only time to date I’ve seen horses in a minor-league park).  I was a little bit bothered by the number of people in the beer garden.  The beer garden is in the pavilion, which means that

A fine sense of Tacoma baseball history is on display in the pavilion–a number of plaques for big names in Tacoma baseball history (I remember Matty Alou), but most tellingly, a lovely mural.  The mural is of a dugout with a player wearing the uniform for each of the teams in  Tacoma history.  I was quite pleased and impressed.  So much nicer than the usual cinderblock wall left blank!  Additionally, they have reserved one of their better seats for a sculpture of Mr. Cheney, the bigwig in Tacoma baseball history for whom the field was named.  Not only is he there in the front row of back section, but there’s a bronzed sculpted scorecard by his feet and even some sculpted peanut shells on the ground around him.  I can’t think of a better tribute for a baseball lover than to be set down in a good seat to enjoy and score baseball 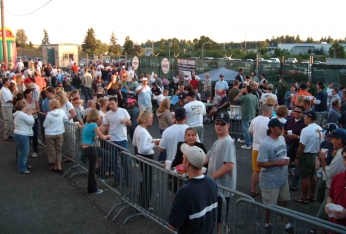 Regional feel:  7.5/10
Good sense of Tacoma history, Mt. Rainier on the scoreboard, and evergreen trees beyond the field.  Too bad it’s in a nondescript semi-suburban location.

Charm:  4.5/5
Cheney Stadium manages to feel legitimately old without being ancient or kitschy-retro.

Spectacle: 4/5
Pretty good.  Not too much–feels about right for AAA ball. 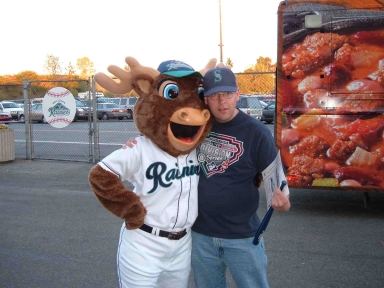 Rhubarb is a silly name.  A moose should have a proboscis bigger than his.  The name Rainiers is fantastic–beautiful, local, majestic.

Aesthetics:  3.5/5
The ballpark was quite lovely, but there was almost zero in the way of views beyond merely trees.

Pavilion area:  5/5
Quite good–loads of activity, lineups, and the like.

Scoreability:  3.5/5
Nice use of scoreboard, but failed to give information on some borderline scoring decisions.

Fans:  5/5
How can I possibly vote against my sister and her family?

Intangibles:  4/5
A good ballgame and a lot of fun with the folks.  I’ll be back.

The first game for Jeremy Reed in the Mariners’ organization after the M’s gave up Freddy Garcia to get him.  He goes two for four with a two-run home run.

A.J. Zapp hits a pair of homers for Tacoma.

Portland’s Xavier Nady also homered just a few days before getting called up to the Padres.

In 2007, I see Salt Lake’s Joe Saunders for the second time in two weeks.  He impresses, going 7 strong innings and striking out 7.

Salt Lake blows a 4-0 lead in 2007 before winning on Brandon Wood’s 9th-inning single.

A delightful experience in a pair of games in 2015 led to one of my favorite moments ever at a ballpark.  Our family went to a game in May that year, and my son Steven, who was 6, did his usual trick of writing 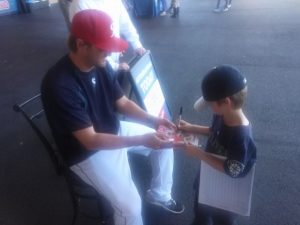 down the lineups before the game. A Rainiers photographer spotted it and took several photos. When I asked when they’d be used, he said that a shot like that looked like a cover shot for a future version of the program.  Sure enough, the Rainiers were nice enough to notify me when he would be on the cover, and we headed back up there to get about a zillion copies.

In the pregame, the Rainiers’ Shawn O’Malley was giving autographs on the concourse. Steven went up to get one.  Steven told O’Malley (and everyone else he saw at the ballpark) that he was on the cover of the program. O’Malley’s response has made me a permanent fan of his.  He said “Well, I should be asking for YOUR autograph.”  He then had an usher grab him a copy of the program…and thus it came to be that a professional baseball player asked for my son’s autograph.