(Blair County Ballpark has been renamed Peoples Natural Gas Field. Incidentally, this is the same name as the airspace within five feet of me at any given moment.)
(Click on any image to see a larger version.)

A ballgame was welcome after a day of American Tragedy Tourism.  I spent much of the morning at the Shanksville memorial, which is a pilgrimage I believe 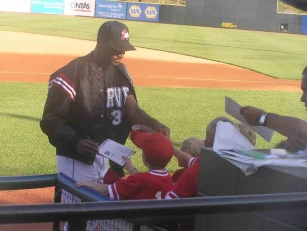 every American should take, and then at the Johnstown Flood National Memorial, which was depressing in an entirely different way.  Blair County Ballpark was a refreshing change at the end of the day. I had heard many positive 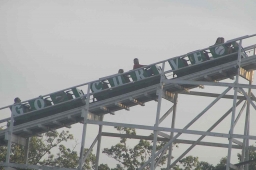 reviews of the ballpark–some call it the best in the United States–and while I prefer a few others to this one, it still was a tremendous place to see a ballgame, and well worth a detour if you’re anywhere nearby.

Blair County Ballpark sits adjacent to Lakemont Park, and a roller coaster sits past right field. This creates a carnival atmosphere to the ballpark. I could see this being a bad thing–after all, I loathe any ballpark with a carousel, and

I don’t like distractions during my baseball (though between innings, they’re fine).  But Blair County Ballpark manages to take its baseball seriously without taking itself seriously, which is fantastic. 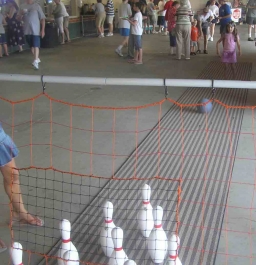 First, the bit about not taking itself too seriously. There’s plenty of wackiness going on, and not just from the multiple mascots. The night I attended was a promotion to honor bowling in the Altoona area.  Kids could bowl out on the concourse, and the first pitch was bowled out (a bowling ball painted to look like a baseball).  There were

about 800 first pitches, including one from Mrs. Pennsylvania (I didn’t know they still did that), and loads of promotions between every inning.  Many of the distractions were quite hilarious–they recruited youngsters to walk along the tops of the dugouts between every inning with a card saying the inning number, like the ring card girls in boxing.  It was really very funny.

On the other hand, however, when it came time for baseball, the ballpark provided a great experience.  Unlike any other lower-level ballpark I’d been to, the ballpark gave in-progress scores of other minor-league games.

A true fan of the Eastern League could keep track of the divisional races on one of the two big video screens.  Speaking of which, I was impressed that a double-A ballpark would have two big scoreboard screens.  Some might feel it’s unnecessary,

but I don’t see anything wrong with a small-town park having a gorgeous couple of scoreboards that they use properly. 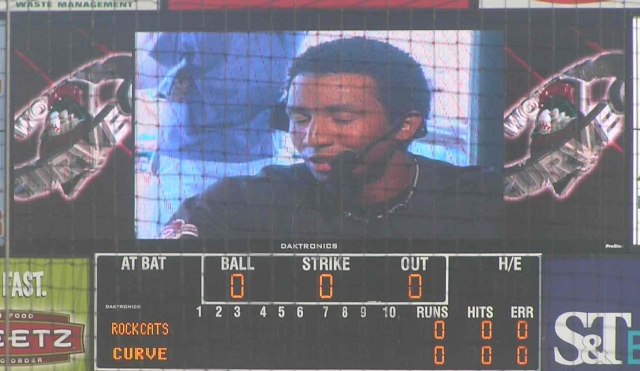 Memory of the game:  a foul ball glanced off of a three-year-old girl a few rows behind me.  Sweetly, the entire Curve dugout came out to look and see if the kid was okay.  I believe Steamer came to give her a Diesel Dawg stuffed animal.  People are really nice.

I had the pleasure of hanging out with a great guy for most of the ballgame.  As usual, the conversation began when we both scored the game. 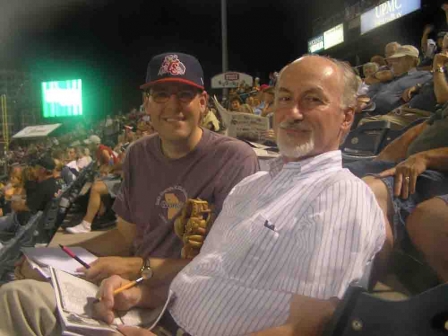 He’s a history professor (emeritus? I don’t remember) at nearby Indiana University of Pennsylvania. We talked a bit about teaching, baseball, and travel. I teach history sometimes (although literature is more my game), and I recognize that a love of history plays into a love of baseball.  I had spent an entire day reflecting on the history of our nation, both distant and recent, and was in a place that respected its history–from the locally-appropriate name to the plaques honoring every former Altoona player to make the majors. Hearing about the area through the eyes of a historian was a nice touch–the icing on the cake. He was kind enough to give me a business card…which I, like a bonehead, have since lost.  Nonetheless, thanks for the conversation, Professor.

On the whole, it’s a unique ballpark experience in a lovely, while often overlooked, part of the country.  It lands very near the top of my list.  The atmosphere was the perfect blend of frivolous and baseball-respecting, and the people were quite fun.

Regional feel: 7.5/10
Pretty good, but not quite great.  I like the unique feel of watching a game in the shadow of a roller coaster, but I can’t say I could look around and now where I was.  Still, the team name and a sense of local baseball history is apparent. 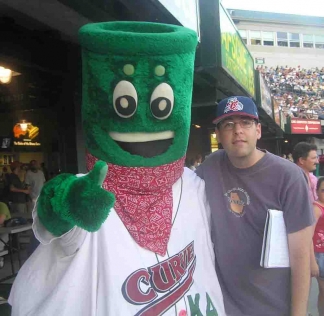 Steamer and me above, and Steamer’s pet dog Diesel Dawg below.  Steamer has his own email and his own pets.  Weird.  I like the idea of Steamer, but he looks derivative of the Phillie Phanatic, and the dog, while adorable, could be anywhere.

Pavilion area:  5/5
Loads of activity, all within view of the ballgame.

Intangibles:  4/5
On the whole, a fine night, but maybe I had my expectations too high.