Note: The writing (until the update) is from my original visit to the ballpark in 1999. The photos are from my visit in 2021.

BankOne Ballpark changed its name to Chase Field before the 2006 season.

I have to admit, I was quite excited when my job took me to Phoenix in the summer of 1999…I made it a point to play hooky and get myself to BankOne Ballpark.  The quirky outfield, the pool…I was excited to see this place.  Alas, I was disappointed.

I understand the need to keep the place closed all day–the day I went to the ballpark, the high was 111 Fahrenheit.  The lows

on those days are in the 90s, and even a hard-core fan like me will skip the ballpark and go to a Karaoke bar if given the chance on a night like this.  So I’m not saying they shouldn’t have built the roof (as I feel about Safeco Field).  But the necessity of making the place enclosed means that you can forget any views.

and all there is to see are two huge 12-14 story walls meeting at a right angle beyond center field.  Since there can be no place anywhere in a baseball park not covered by advertising, they’ve put several neon corporate logos on the wall…and that’s all you’re able to look out at if ever your eyes wander.  It’s not as bad in foul territory, where the third deck goes up high–very high, and at a wonderfully steep angle–and that’s what blocks your view of the outside world.  But those walls past centerfield?  Necessary for comfort, but this doesn’t mean I have to like it.

When the roof is closed, the place feels more like an airplane hangar than anything else.  Maybe it’s the square shape…as much as I dislike the Astrodome, Metrodome, and Kingdome, (and don’t get me wrong, the BOB is far better than these), I never felt like they were hangars, I think because they’re round.  But I think that BOB is like the building they build the Space

Shuttles in, only we’ve got tiny little baseball players playing down at the bottom of it, like ants in an abandoned can of Fresca.

They play this hugely majestic music as they open up the roof at game time.  Somehow it doesn’t work for me because the roof is moving almost imperceptibly slowly.  Not nearly as impessive-looking as they want you to think it is.  Also, after they’ve air-conditioned the hell out of the place all day to make it tolerable at night, I’m pretty sure they keep the air-conditioning 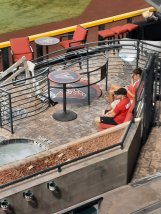 running during the game to keep you comfortable…thereby air-conditioning the surrounding neighborhood as well.  I appreciate the effort to keep me cool, but I couldn’t help thinking of the terrible waste of energy this all was.  I wonder what their energy bill for the year is compared to, say, Kauffman or Busch or Dodger Stadium or somewhere else that can be hot, but where people are left to fend for themselves.

I’m likely to go to a few more games here, since my good friend Rob now resides in Tempe.  Maybe it’ll grow on me.

The game?  Not at all memorable.  A good D-backs team beating the snot out of a bad Marlins team.  I went with a co-worker who I had a crush on.  She came along with the following statement: “I don’t want to go, and I’d even pay for the ticket, but I don’t think you should have to go alone.”   Perhaps she could have said this to me before I offered to buy her a ticket.  Worst of all, she read a book during the game.  She could have walked around, she could have compelled me to buy her endless concessions, she could have asked stupid questions all night…but reading a book?  Yuck. I no longer had a crush on her at the end of the game.

UPDATE AUGUST 2021: We didn’t intend to go to a Diamondbacks game in August 2021. In fact, we didn’t intend to be anywhere near 113-degree Phoenix. But when 12-year-old Steven and I headed to Pennsylvania and Ohio for our tandem baseball trip in 2021, our flight from Portland to Phoenix was nearly 6 hours late, and there was no hope of a connection until the next morning. We got a free hotel room and had some time to kill. And the Diamondbacks were at home. So we had an emergency replacement baseball game.

I wasn’t too impressed with the ballpark again, even with my older eyes. My “ants at the bottom of a giant can of Fresca” 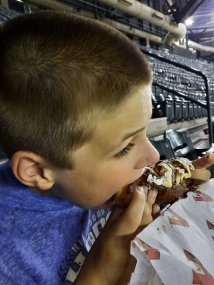 I noticed some things I missed the first time around. One was the way the escalators between levels were on the outside of the enclosed structure (and the air conditioning). When Steven and I went to get him his churro dog (look it up: he says it was delicious) for his 5th-inning treat, we stepped outside the enclosed stadium to go down two levels. While we were out, Curt Casali hit a home run. We had no idea: we couldn’t hear the crack of the bat or the crowd. I know that if you leave your seat, you miss what you miss, but in any other stadium, we’d at least hear the sounds of a home run. Not here. The giant windows had been updated, I think: there was some more light. But this was still antiseptic and strange.

On the positive side, Chase Field offers the best nachos I’ve ever had at a ballpark. Check ’em out.

Arizona had a 4-6-3 double play that I wrote in my scorecard thusly:  “Bell-Fox-Lee.”  I challenge anyone to come up with an infield DP combination in baseball history that is fewer than 10 total letters.  I mean, Mark Grudzielanek or Doug Mientkiewicz have that beat all by themselves.

The D-backs scored 3 separate runs on Marlin wild pitches.  It was that ugly.

In addition to his home run, Curt Casali allows Arizona runners to advance when he gathers in the ball with his catcher’s mask.