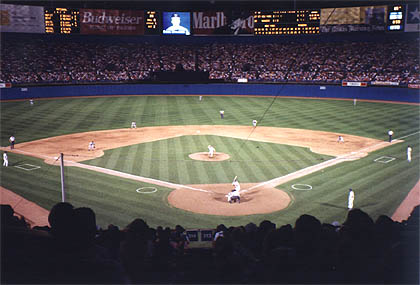 Arlington Stadium was demolished in 1994.

Arlington Stadium was the one big-city stop for Dad and I on my way to start teaching in rural Louisiana.  We had about a week to get from Denver to Baton Rouge, so Dad and I made a few rules for the trip.

Rule 1:  Avoid the interstate at all costs.  When possible, we would even take roads that were not on our map.  For instance, if there was one town in eastern Colorado or western Kansas, and another town 12-20 miles away, and no road between them on our map, we knew–just knew–that if we went to the first town and drove out of it in the direction of the second, we would be on a county road between them.  And we often were.  That is an incredibly fun way to travel.

Rule 2:  We would choose destinations based on the names of towns we liked.  Our first destination was Punkin Center, Colorado.  It ain’t much–just a couple of buildings–but I’ve been there, and you haven’t.  Then we headed down through southeastern Colorado, through some alienatingly flat (but still somehow beautiful) grasslands in southwestern Kansas, on our way to the place we both wanted to spend the night–Hooker, Oklahoma.  How could Dad and I travel across the country without visiting a Hooker?  We made it there about sunset and looked for a hotel, but the one we found, to be honest, looked like a small-h hooker motel, so we retreated to Kansas for the night.  We did pass Hooker High School, however, which boasted Hooker Pride.  The Oklahoma Panhandle…well, it once was no-man’s-land, belonging not to the Native Americans, European Americans or the Mexicans, but to nobody.  I now know why.  Nobody wanted it.  It’s flat, boring, bleak, and depressing.  Hooker is 15 miles from Guymon, Oklahoma, and from Hooker, you could not only see Guymon, but you could see where the dead-straight road you were on cut through Guymon.  Very, very dull, bleak, and hot.  But I’ve been there, and for that alone, it’s worth going.

Rule 3:  Avoid Texas if we could.  I was raised in an exceedingly tolerant and loving household, where we were taught to be kind and respectful to everyone regardless of race, nationality, gender, creed, or sexual orientation.  The only real exception to this rule was Texans.  Don’t get me wrong, some of our best friends are Texans, and we certainly wish them well.  But I think Dad saw a few too many wads of used chew on otherwise white ski slopes (I once even heard a few folks shouting “yee-haw” on the chair lift) to extend his tolerance to Texans.  But when I suggested we do a little father-son bonding at a major-league baseball game, A’s versus Rangers, he decided to set foot in Texas to bond with me.  That was quite a sacrifice, Dad, and I thank you for it.

There was nothing terribly wrong with the stadium, although it had more a minor-league feel than anything else.  Dad and I sat down the right-field line and watched Ranger pitching absolutely make a mockery of the game.  But we focused our binoculars on Rickey Henderson’s stance, marveled at how patriotic the Texas folk were (everyone boisterously singing the national anthem), and talked about whatever we thought about, since the game was so bad it wasn’t a distraction.  You know–we bonded.  You don’t need a Hooker for that.

Terry Steinbach comes to the plate with the bases loaded in each of his first three at-bats.

Dave Stewart and a reliever combine for a 4-hit shutout.