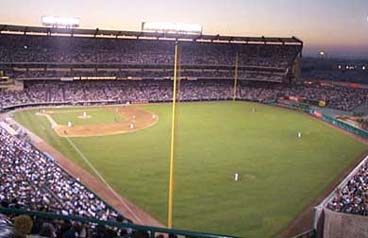 Stadium was called Anaheim Stadium for my first visit, Edison Field for the second.  As of the 2004 season, the stadium is called Angels Stadium of Anaheim.

There is hope for multipurpose cookie-cutter stadiums!  Both Edison and Busch were once boring combination football/baseball facilities.  Both had their football teams high-tail it out of town, and both reorganized into baseball-only facilities.  And at least Anaheim always had the sense to have natural grass.  It is now a fairly nice place to watch a baseball game on the West Coast.

If you’re really lucky, like my friend Chris and I were on my first visit, you might even get in for free.  You just have to time your visit perfectly and arrive in the midst of a marital spat.  Chris and I fought god-awful traffic for about a million miles on our way down, and had circumnavigated the stadium on foot in our effort to find the ticket booth.  As we were finally approaching, some exasperated man came up to us.  “Are you guys looking for two tickets?”  We barely had a chance to nod.  “Here are two.  Just TAKE them.  I don’t care.  Just take the damn things.”  Before we could thank him, he’d thrusted them into Chris’s hands and was walking away to harangue his wife.  We hadn’t even figured out what was going on enough to offer to buy him a beer or whatever.  He was long gone (like his marriage, I bet).  That’s how Chris and I wound up sitting about 15 rows behind first base for free.  Try it sometime…just walk near married couples having awful fights outside the ticket booth.

Seats that close can be dangerous, though.  It was at that game I saw the worst injury I’ve ever seen at a baseball game–and it was to a spectator.  It was the ninth inning, and a woman, 50-60-ish, was getting her stuff to leave (always a bad mistake…NEVER leave early, I say).  Just then, some Twin smacked a wicked line drive up the first base line.  As the ball came, she was leaning over to pick up her purse, and the ball, surely traveling at least 80 miles an hour, got her right on top of the head.  I’m sure it knocked her unconscious.  Stadium security worked on her for most of the inning…at which point the poor, barely-revived woman had to be walked up the aisle past everybody so we could get a good look at her.  We applauded as she passed.  I wonder if that made her head hurt more.

Anyway, the stadium was decent, nothing special in 1993…and by the time I got back there for its baseball-only incarnation in 2000, it was a bit better.  Not as nice as Coors or Pacific Bell, to be sure, but nicer than it was.  It doesn’t quite pass my test of true ballpark greatness, which is to say that it should be obvious, just from sitting inside the park, where in the United States or Canada you are.  The Disney/Angels folks put in those red rocks out past center field.  They’re pretty, sure, but what do they have to do with Southern California?  How about a beach volleyball pit out there?  That way, the L.A. people who go to the game to see and be seen don’t have to take up any space in their seats, and bored spectators can aim their binoculars at the gorgeous people in swimsuits out past center field.  They could also have tables with umbrellas where you could get sit with your drink.  Now, to me, that would be something to look at.  On SportsCenter…somebody hits a home run…and past center field, you see sand and umbrellas, abs and bikinis?  Where else could it be but Southern California?

If you’re looking for a batting-practice home run, park yourself in the right field corner.  It was a hot day game when I was there, but if you have a glove, you can catch one on the fly or clamber for one in the seats.  I just don’t have the killer instinct, I guess…I was second man in for three home run balls.  Plus, nice pitchers will toss balls to kids in the front row.  Or, better, hand them to them.  Like Doug Brocail of the Detroit Tigers…he walked right up to the kids screaming for baseballs, plopped one right it a kid’s glove, took his pen, and signed it.  Then he signed autographs for about 10-15 minutes in the 90+ degree heat when he could have been cooling off in the clubhouse.  I will cheer for Doug Brocail anytime I see him anywhere from now on…he made some random kids in L.A. happy.

Not that everyone was happy. The elderly lady on a trip from her senior center was fun to talk to because she was so damn angry at her Angels and Ken Hill, but nice to me (although I didn’t tell her I was a Mariner fan eager to see another Angels fold in progress).

So, the ballpark isn’t terribly special, but I enjoyed going there and appreciated the efforts at change.  It is, after all, a ballpark, and I’ll take that over Disneyland every day of the week.

Nothing too great.  Bobby Higginson homered.  Kirby Puckett scored a couple of times and stole a base.